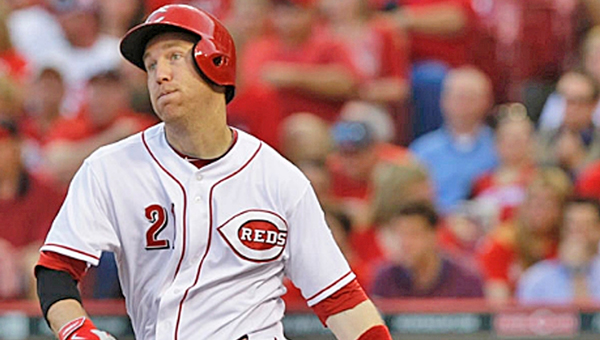 Chase Headley homered in the ninth inning off Chapman, the first hit the hard-throwing lefty allowed since his return from being hit in the head by a line drive, and the San Diego Padres beat the Reds 2-1 on Tuesday night.

The Padres got their season-high fourth straight win despite managing only three hits. Seth Smith had the only two hits that Mike Leake allowed in the first eight innings.

“He couldn’t have pitched any better,” manager Bryan Price said. “He was holding baserunners. He fielded his position. He did a little bit of everything.”

Headley connected on a 99 mph fastball from Chapman (0-1), who was making his second appearance since undergoing surgery to repair damage after being struck in the left eye and nose during a spring training game.

“One problem with a power pitcher is if somebody puts a good swing on it, they can do some damage on one pitch,” catcher Brayan Pena said. “It was just one pitch. It’s one of those things where you’ve got to give them some credit. Everybody’s happy with the way he’s throwing the baseball.”

Joaquin Benoit (1-0) allowed a walk in the eighth. Huston Street got the last three outs for his 12th save in as many chances. Street hasn’t allowed a run in his last 10 innings.

Smith was the NL’s most recent player of the week and extended his hitting streak to nine games, matching his career high. He’s 19 for 34 during the streak.

The rest of San Diego’s lowly offense didn’t do much until Headley connected with two outs in the top of the ninth. The Padres came in last in the league in batting average and scoring.

Brandon Phillips had three of Cincinnati’s seven hits, including an RBI single in the first inning. Cincinnati has 12 one-run losses, most in the majors.

“Those are what we’re most upset about,” Pena said. “We know we’re better than that. Our starters are doing a tremendous job giving us a chance. Leake gave us more than we asked for. We couldn’t hit for him today.”

The Padres activated Carlos Quentin off the disabled list for the start of the series, moving their lineup closer to full strength. The outfielder missed the first 39 games with a bruised left knee. He went 3 for 18 during a minor league rehab stint and was 0 for 3 with a walk in his return.

Andrew Cashner got a no-decision despite allowing only one run over seven innings, a common theme to his season. The right-hander has pitched well, but gotten little support from his offense.

The Padres have scored only one run in the last 25 innings while he’s been on the mound. They managed only one Tuesday night. Cashner gave up seven hits and one walk while striking out six.

Cashner pitched out of a bases-loaded, one-out threat in the sixth by getting Chris Heisey to hit into a forceout at home and Zack Cozart to pop out.

Smith doubled in the fourth and scored on Jedd Gyorko’s sacrifice fly that tied it at 1. The right fielder also prevented the Reds from putting together a big inning in the first.

Billy Hamilton led off with a triple and scored on Phillips’ single. Joey Votto followed with a single to right, but Smith threw him out as he tried for second on the play.

Todd Frazier extended his hitting streak to a career-high 12 games, the longest by a Red this season.

NOTES: The Padres recalled RHP Kevin Quackenbush from Triple-A El Paso. They optioned utility player Kyle Blanks to El Paso and put RHP Dale Thayer on paternity leave. … Ian Kennedy (2-4) faces Johnny Cueto (3-2) in the second game of the series. Kennedy is 3-0 career against Cincinnati. Cueto leads the NL with a 1.43 ERA. … C Devin Mesoraco (hamstring) and LHP Tony Cingranci (shoulder) could be activated during the Reds’ upcoming trip. RHP Mat Latos, sidelined all season by knee surgery and a sore forearm, isn’t expected back until the first week of June. … The Reds haven’t made an error in their last eight games, a season high. They have only 12 errors, fewest in the majors.

Vikings down Falcons for sectional title, 6-4

Jim Walker jim.walker@irontontribune.com   AID — The Symmes Valley offense proved to be quite a hit. The Vikings pounded out... read more