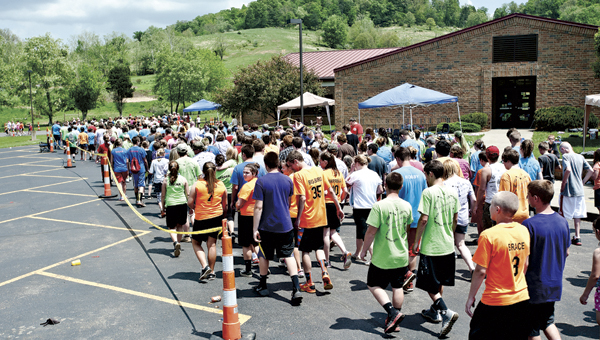 Symmes Valley students join their friends and loved ones during the Survivors Lap at Relay for Life Tuesday.

For something that doesn’t discriminate on the grounds of race, gender, sex, religion, height, weight or anything else, students at Symmes Valley are sure trying hard to get rid of it.

The collective eradication effort is geared toward cancer.

In 2014, there will be an estimated 1,665,540 new cancer cases diagnosed and 585,720 cancer deaths in the United States. Cancer remains the second most common cause of death in the nation, accounting for nearly one out of every four deaths. Symmes Valley elementary and middle school students raised money for the American Cancer Society’s Relay for Life on Tuesday in an attempt to dispose of the disease for good.

“Both schools work hard on this,” Jeremy Newman, Symmes Valley elementary and junior high principal, said. “People take a lot of pride in this. It’s basically a fundraising festival and it’s for a good cause.”

The Symmes Valley Relay for Life has raised more than $200,000 since teachers Amy Ferguson and Becky Bowling started the event nine years ago.

Ferguson, a fifth-grade language arts teacher, and Bowling, a middle school math teacher who is retiring after this year, both credited the students for the event’s success.

“It’s so good for the kids to see their efforts go toward a good cause,” Ferguson said. “They put everything they have into this and they truly believe they will be part of finding a cure for cancer.”

Students in third through eighth-grade set up booths and offered a myriad of items to raise money. Whether it was popcorn, cotton candy or raffle tickets, students had one collective goal: Raising money, and lots of it.

“It’s about the kids,” Bowling said. “This is what they do and they do a really great job.”

At 1 p.m., Bowling announced the fundraising efforts had eclipsed the $20,000 mark.

“I raised $500 before this event by going door-to-door and getting donations,” seventh-grader Kara Saunders, 13, said. “Last year was my first year and we sold lemonade but everybody wants to stop cancer and that’s why we are here.”

Cancer was stopped for Sheila Mootz, 76, of Sharps Creek, who was attending her first Relay for Life event. Mootz began treatment this past July for Primary Peritoneal cancer, a difficult to diagnose and rare form of the disease that develops in a thin layer of tissue that lines the abdomen.

“I think this event is great,” Mootz said as she exited the Survivors Luncheon. “I was stunned when I came off the highway and saw all these cars and people. The kids really seem to enjoy it and they work really hard.”

“My church, Oakland Chapel, really pitched in and helped me,” she said. “They fed me. They took me in their arms and I couldn’t be more thankful.”

Darrin was diagnosed on Sept. 16, 2013, with stage three kidney cancer.

“I had a tumor the size of a tennis ball in my right kidney,” he said. “I noticed I had dark urine. I had some back pain but when you drive a truck for a living a little back pain is nothing unusual.”

Darrin said he was “blown off” during his first hospital visit, but when his condition worsened that weekend, he went to St. Mary’s in Huntington, W.Va.

“Doctors performed CT scans and I was admitted,” he said. “On that Wednesday, two days later, my right kidney was removed.”

Darrin, Mootz and Symmes Valley freshman Ashley Dennison joined other first-time and repeat walkers in the event’s Survivors Lap, which is a trip around the track while clasping a yellow rose and surrounded by loved ones to celebrate beating cancer.

“You are why we are here,” Ferguson told the survivors. “It’s such a blessing to see the new faces and see the faces of the same people here year after year.”

Wellness program next for LEDC, The Point

COLUMBUS — Providing a health and wellness center for its employees is next on the agenda for The Point industrial... read more