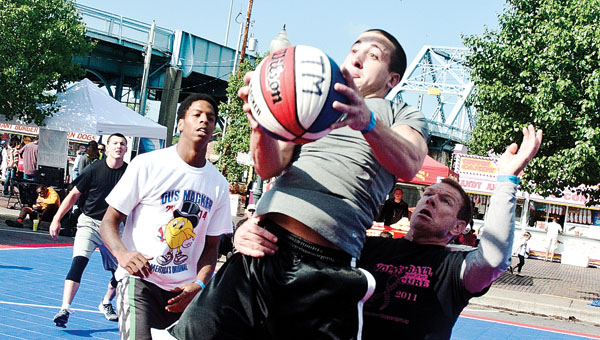 March Madness basketball wrapped up earlier this year when the UConn Huskies defeated the Kentucky Wildcats 60-54 to claim the NCAA national title.

But, thanks to the Friends of Ironton, a little bit of “May Madness” was brought to the city on Saturday as more than 200 teams competed in the Ironton Gus Macker. The tournament has been held for 10 years now, and offers competitive 3-on-3 basketball for a variety of age and skill levels.

“It’s a great tournament,” Robert Dalton, from Louisa, Ky., said. “It’s cool because you can play and enjoy it even if your team isn’t that good. But, at the same time if you want to play in a really competitive game, then there is some really good players in it too.”

“Oh it’s way more physical than my high school games,” Dalton said. “Some courts have people refereeing the games, but other courts just have a person monitor the game. On those courts it’s call your own foul. So it can get pretty rough and emotions can run hot.”

However, after the adrenaline subsides and the emotions cool down every game ends in handshakes and congratulatory comments.

“That’s what it’s about,” Dalton said. “Even when it gets a little heated at the end of the day, it’s about having fun. So it always ends with love.”

Many of the players come from several states away to participate in the tournament and spend the day in downtown Ironton.

“I love the Gus Macker tournaments,” Terrell Reed, from Broadview, Ill., said. “I play in a couple of them every summer and I always try to go to one that I haven’t been to before. This year it was the Ironton Macker. So far I’m having a great time.”

The money raised from the Ironton Gus Macker is split between the FOI and the Gus Macker Tournament Group. The FOI uses the money to help fund the various projects the organization takes on including the Ro-Na Theatre restoration.

“It’s just another event to help us raise a little money,” Beth Campbell, member of the FOI, said. “We don’t make a ton of money off of it. But, I like the event because it is so family friendly and it brings so many people to our downtown.”

The tournament will conclude today with the top teams in each division receiving trophies for their performances.

Lawrence County Commission President Les Boggs is the focus of a pending investigation of voter fraud allegations, according to... read more