A timely tradition… a comtemporary way 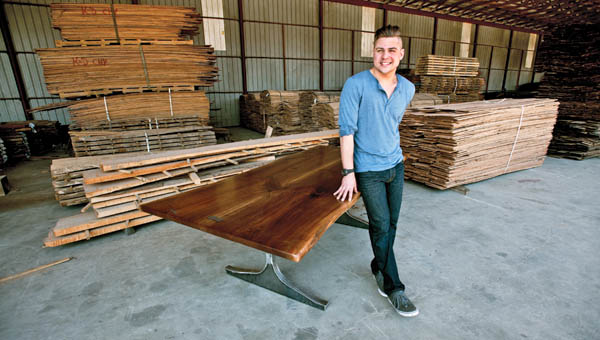 Wayne Stump, 27, of Ashland, Ky., said during each semester of graduate school he spent nearly $2,000 on wood alone.

Wood sculptor and tabletop maker Wayne Stump often conversed with his customers while waiting tables in Huntington, W.Va. But one conversation with one man in particular yielded life-altering results.

Damon Graf, vice president of Graf Brothers Flooring in South Shore, Ky., was a customer of Stump’s and it wasn’t long before the lumber company executive and wood sculptor discovered they had much more to discuss.

“I told him about my passion for sculpture and things like that,” Stump said. “He told me he would like me to tour his facility and let him know what I thought. One of the most expensive things when you’re doing wood sculptures is the material. So I was like, hell yeah, I’m going to meet this guy and get some free wood.”

Stump, 27, of Ashland, Ky., said during each semester of graduate school he spent nearly $2,000 on wood alone.

Stump received his degree in graphic design from the Art Institute of Pittsburgh and his master’s degree in fine art with an emphasis on sculpture from Marshall University. The morning after completing grad school Graf paid Stump a visit and Stump Standards, the wood furniture arm of Graf Bros., was born.

“I met with Damon the day after completing grad school and I showed him the 13 pieces I had done,” Stump said. “He said he wanted to buy three of them. I installed them in his house two weeks later. That’s how I got to be in the position I am in now and it’s been a really good fit from the beginning.”

Stump said working with wood was an amendment to his original agenda.

“They told me in grad school to take a sculpting class to get away from graphic design and it took off from there,” Stump said. “Doing something like these tabletops takes a lot more time and there’s a lot of patience involved and that’s something I never really had because when you work with computers like in graphic design it gives you instant gratification. So with this, I’m in control, yet at the same time, the wood’s going to do what the wood wants to do. I can’t control these cracks and lines.”

The natural cracks, lines and other imperfections in wood are things Stump often uses to his creative advantage, especially when working with walnut, his favorite type of wood.

“It just has really nice lines,” Stump said. “It provides a nice pop of color and contrast.”

His emphasis right now is tabletops, but he has also built end tables, coffee tables, shelving, he has crafted a walnut headboard and step flats for stairs. He does custom bases for his furniture.

For Stump, however, the story the wood could tell is as important as the wood itself.

“A lot of the ones we work with are generally about 250 years old, so there’s a story there,” he said. “I’ve had some that when I’ve sanded I’d find gunshot pellets throughout the wood. It came from the woods, so you never know. I have to welcome those types of visual characteristics.”

Tags placed on the wood and the tables made from it aid in telling its story.

“Most logs are from sustainable forests around the Tri-State and that really gives a nice background story for the person who purchases the tabletop,” Stump said. “They get to purchase a story, w here it comes from, what the species is, etc. A majority of the trees are local. When a client comes to me with a specific need, I look at the tags. These tags tell us everything.”

Graf Bros. stores eight different species for Stump’s tabletop-making purposes. In the eight months he has been creating the custom-made tabletops and bases, he has the timeframe for finishing the product down to a month. In eight months he has completed 17 tables. An 8-foot long, 43-inch wide table weighs 300 pounds on average. He has a 300-year-old poplar table that weighs 400 pounds.

“It takes a while,” he said, “but with each one I learn something new.”

Stump plans and is willing to expand on his offerings, but for now, tabletops are his main focus.

“I get asked a lot why I don’t do chairs, so, I did a chair,” Stump said. “I don’t look at myself as a craftsman I don’t have a shop with a 90-degree saw in it. So I just figured I’d make a chair for a show and hopefully it would turn out nice.”

Research never stops. Stump said he always watches how-to videos because “there’s not really a book about building a table that has two pieces of the same wood right next to each other,” which is called book matching.

“It allows the opportunity to work with different mediums to solve issues,” he said. “Cracks, for example, I use steel bowties instead of the traditional wood. That’s me just trying to push the limits and understanding what tables have done in the past.”

Edges of the tables are beveled to accommodate people’s elbows and sprayed with a water-based environmentally safe lacquer with an 80-year life.

“One of the things I always tell clients is they need to worry about who they’re going to pass their tables down to,” he said. “There’s really low maintenance with this. Wipe it with a rag and it’s done.”

“It’s the Super Bowl of furniture shows for people like me,” he said. “If they have a show and Graf Bros. wants to feature tabletops, it also benefits me so it’s a win-win. I get to travel and promote my company to customers.”

His favorite client, he said, is the one who gives him complete creative freedom.

“If someone says ‘go nuts,’ now that’s my favorite client,” he said. “Because I get to do whatever I want. I try to be innovative. Chances are whatever it is has been done before. So I just ask myself, ‘how am I going to do it differently?’”