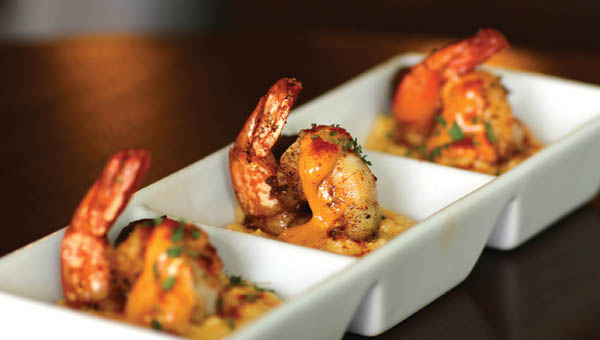 What may look like any other fine dining restaurant’s menu is actually anything but typical at Le Bistro in Huntington, W.Va.

Favorites like filet mignon, salmon and braised short ribs have a home on this year’s spring and summer dinner menu, but don’t expect those classics to be strictly traditional.

The interior of the Third Avenue restaurant is even a telltale sign that Le Bistro isn’t typical to most fine dining establishments. 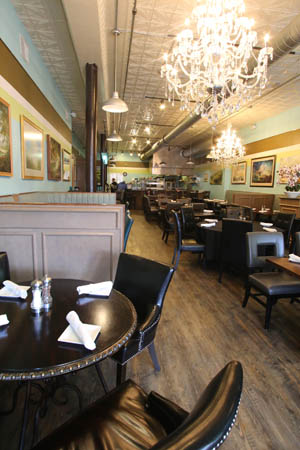 The interior of the Third Avenue restaurant is even a telltale sign that Le Bistro isn’t typical to most fine dining establishments.

Two large crystal chandeliers are juxtaposed against exposed ductwork and track lighting. The walls are painted with light blues, greens and rich browns and are a rotating gallery of local artwork. It is hard to find symmetry in the seating area, with its round and rectangular dark wooden tables, horseshoe booths and long bench seats.

Even the music floating across the restaurant — indie favorites like Phoenix, Miike Snow and Modest Mouse — adds to Le Bistro’s modern atmosphere.

“We try to stay current on what the popular trends are,” Barker said. “We like to experiment, the entire kitchen staff.”

Case in point, the braised short ribs are served alongside smoked gouda grits, creamy slaw and an Ancho blueberry sauce. The salmon is paired with a sweet mango glaze and served with rice, asparagus and a strawberry-rhubarb ponzu.

Even the steak frites, a staple item on any classic French menu, is elevated with miso butter and truffle fries with Parmesan.

Barker, 31, said the creative process at Le Bistro is a collaborative effort, with everyone in the seven-strong kitchen crew contributing ideas.

Ben VanHorn, chef de cuisine, said the restaurant has gotten a lot of positive feedback about the adventurous nature of the menus, which change with the seasons.

“We’ve actually had a few people who eat a lot in New York City, L.A., higher end places, and they say we definitely compete with them,” VanHorn said. “That’s always a shock to people to find that we are actually located in Huntington, W.Va. It has a bigger city feel.”

After having tried any dish on the menu, one could conclude Barker and VanHorn must have spent time cooking in those high-end restaurants in New York and Los Angeles. But, both are Tri-State natives and earned their culinary degrees from Ashland Community and Technical College.

Both Barker and VanHorn also spent several years in the kitchen at Bellefonte Country Club.

VanHorn later went on to become the executive chef at Trinity Station Retirement Community before joining Barker at Le Bistro.

Barker left the country club to be the pastry chef at Le Bistro about two years ago when the restaurant shared space with a deli and served only dinner. Soon after the restaurant opened full-time with Barker heading up the lunch service.

Just the opposite of the dinner menu, Barker describes the lunch fare as modern fast casual that is upscale but affordable.

A crowd favorite for lunch is an unexpected item called “The Leftover,” which is comfort food at its best — roasted herbed turkey, sage dressing, whipped potatoes and gravy with cranberry chutney on the side.

Shrimp and grits, croque monsieur and a bacon and date tart are also favorites.

One of the unique things about Le Bistro that sets it apart from other restaurants is the seasonal menu changes.

Barker said changing with the seasons has its advantages.

“We can buy local when it’s available,” she said. “Creatively, it’s exciting for me. I don’t know that I would want to work in a restaurant a long time with the same menu. I’ve never had to do that thank goodness. And the regulars want to see something new.”

One of those new items this season is the mahi-mahi skewers, a creation of VanHorn’s.

The mahi-mahi sits atop tortilla hummus and a banana blossom pineapple slaw with a Guinness fritter on top and atchara sauce.

“It’s my version of a fish taco,” VanHorn said. “It’s all the elements you’d find in a fish taco, just presented in a different way.”

“You can break food down to a molecular level of ingredients and you can get flavor compounds that are similar based on the biology of the plant or animal or whatever you’re going to cook,” he said. “So you can get a lot of different odd combinations, like parsley and banana. So when you find something that is a little odd on the menu it is usually derived from that.”

The wine and beer lists are as varied as the dishes on the menu, with a hand-picked boutique selection of reds and whites, ales and stouts.

And for eaters who may be hesitant to try something new, the chefs said there is something for everyone at Le Bistro.

“The dinner menu is not nearly as out there as it seems sometimes,” Barker said. “The flavors are always good. I think people are standoffish or reserved about trying things. It’s wildly adventurous and classic at the same time. … Even for lunch, we try to add some interesting elements and try to elevate what is expected when you come to eat somewhere.

“It’s an experience. It’s not eating. You can go eat anywhere.”

A timely tradition… a comtemporary way

Wayne Stump, 27, of Ashland, Ky., said during each semester of graduate school he spent nearly $2,000 on wood alone.... read more