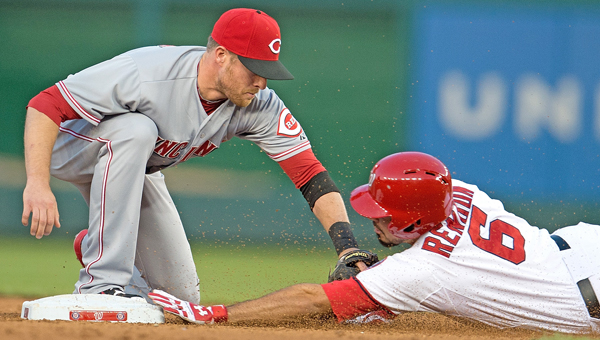 Washington Nationals third baseman Anthony Rendon (6) is tagged out at second base by Cincinnati Reds shortstop Zack Cozart (2) trying to stretch a hit into a double during the third inning of their game at Nationals Park in Washington, D.C, Monday. The Reds won 4-3 in 15 innings on Todd Frazier’s two-run home run. (MCT Direct)

Todd Frazier finally won it for them with his bat.

Frazier’s two-run homer in the 15th inning lifted the Reds over the Nationals 4-3.

Brandon Phillips singled off Ross Detwiler (0-2) to open the inning and, with one out, Frazier homered to center.

“I (wanted) to drive something. I had two good at-bats before that. It’s crazy how the game goes,” Frazier said. “You’re 0 for 3 and then you get three more at-bats in extra innings and you go 3 for 3. So it’s like a whole new game and I got a ball up, elevated and tried to drive it.”

The Reds twice made two-out diving catches that prevented the winning run from scoring.

Phillips robbed Wilson Ramos behind second base with a runner on third to end the 11th.

In the 14th, Billy Hamilton got a great jump and made a diving grab in right center of Anthony Rendon’s liner with a man on second.

“I knew if I was going to get it, I had to go right away,” Hamilton said. “If I hesitated one little step, it would have been down.”

Logan Ondrusek (1-2) worked two innings, allowing an RBI single to Greg Dobbs in the bottom of the 15th before getting Danny Espinosa to fly out to deep right to end the 4-hour, 58-minute game.

“That was just a total grind, every player on the team played some sort of role in that game, and the defense was phenomenal,” Reds manager Bryan Price said.

Washington trailed 2-1 when Espinosa doubled to left off Aroldis Chapman to start the ninth. He advanced to third on a fly to deep left-center by Kevin Frandsen and scored on pinch-hitter Scott Hairston’s fly to deep left.

Leake, who left with a 2-1 lead, saw the bullpen blow its third save in games he has left with the lead. He gave up a run and seven hits, and is 0-1 with 1.82 ERA in four starts in May.

Strasburg went seven innings, allowing two runs and six hits. He walked only one, but hit two batters, both of whom scored.

Both teams had their share of chances. The Reds were 2 for 24 with runners in scoring position, and the Nationals were 2 for 18.

“All you can do is hit and sometimes you wish you could steer it after you hit it, but that doesn’t happen,” Nationals manager Matt Williams said.

The Reds were without first baseman Joey Votto (strained left quadriceps), who is rehabbing in Cincinnati, for the fourth straight game.

Trailing 2-0, Washington finally got to Leake in the seventh. Nate McLouth singled with one out and took second on a wild pitch. With two outs, Denard Span singled to right, scoring McLouth and ending Leake’s night after 110 pitches.

The Reds used their legs to take a 1-0 lead in the fourth.

Frazier was hit by a pitch with one out and went to third on Brayan Pena’s single. With Chris Heisey at the plate, Ramos blocked a pitch by Strasburg in the dirt and Pena broke for second. Frazier dashed home when Ramos threw to second and second baseman Espinosa’s only play was on Pena, who was tagged out.

The Reds made it 2-0 in the fifth. Zack Cozart was hit on the arm by a fastball from Strasburg. On a hit-and-run play, Hamilton singled him to third and Cozart scored on a single by Skip Schumaker.

Jim Walker jim.walker@irontontribune.com   BIDWELL — Jacob Henson was thisclose to a no-hitter. Henson gave up a one-out single to... read more