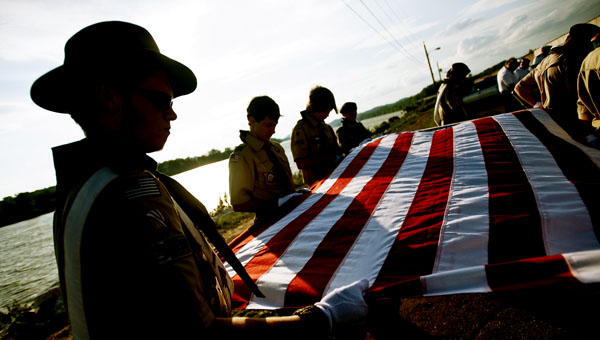 Members of Ironton Boy Scout Troop 106 carry the American flag during Navy Night event, in 2013, at the Center Street Boat Landing in Ironton.

The rich tradition of Memorial Day events in Ironton kicks off at 7 p.m. Thursday with Navy Night at the Ironton riverfront.

“We keep having really good speakers and that brings people in,” she said. “We also try to change it up a bit every year to keep people coming back. Hopefully it doesn’t rain.”

Guest speaker is Lt. Cmdr. Matthew Totoro, a member of the United States Navy Reserve and native of Eleanor, W.Va. Pyles said Totoro has been coming to Navy Night for a while and has always spoken fondly of the event.

The Rev. Damion Sneed will give the invocation and Ironton VFW Post 8850 will post the colors. Ironton Mayor Rich Blankenship will read a proclamation before Boy Scout Troop No. 106 performs a flag-folding ceremony. The Ohio University Community Band will play the “Armed Forces Salute” and VFW 8850 will do the gunnery salute. The Lawrence County Sheriff Marine Patrol and Marathon Marine Transportation will place a wreath in the Ohio River as a memorial to veterans lost at sea.

Veteran of the Army National Guard and Common Pleas Court Judge Charles Cooper will again act as master of ceremonies, a role he took on after being guest speaker seven years ago.

“It’s an honor to help with this every year,” Cooper said. “I like it because it symbolizes the significance of Memorial Day. It’s solemn, but peppy at the same time with the band and the speaker, there’s even a bit of pageantry. It’s a very nice ceremony with just a bunch of nice things.”

Cooper said he will be master of ceremonies for Navy Night as long as he is asked to do so.

“I have a lot of respect for the folks who dedicate themselves to this and all the events,” he said. “If there’s one small thing I can do to help them out, I will do it.”