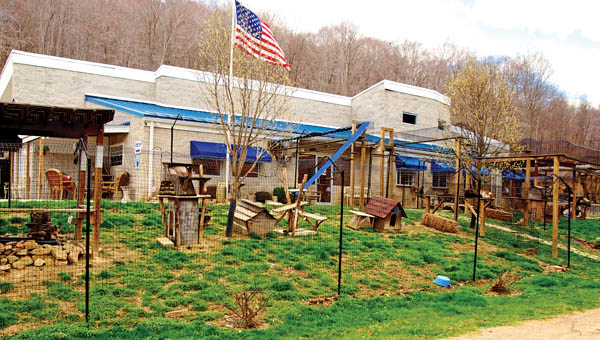 Offering pets a second chance at a life and home

People are social creatures. It’s in our nature to seek out others for friendship and companionship. For many those types of bonds are formed with not only other humans, but animals as well.

Sierra was one of those animals, a loyal and loving companion of Bernie Counts. When Counts passed away in 2000, Sierra was left without a caretaker. That was until Dr. Gail Counts decided to start Sierra’s Haven, a nonprofit animal sanctuary and rescue in memory of her brother and in honor of his beloved cat.

“Dr. Gail wanted a way to keep her brother’s memory alive,” Anne Smedley, a volunteer at Sierra’s Haven since 2009, said. “So she founded this rescue in 2006 and named it after her brother’s cat. Since then we have been able to save more than 5,000 animals.”

Sierra’s Haven is located in Portsmouth, Ohio, and works to rescue and relocate homeless or injured cats and dogs. Walking up to the entrance the first thing visitors see is an elaborate tunnel system that doubles as a jungle gym and a passage to the outdoors for the haven’s cats.

“They are fun to watch,” Smedley said, looking up at the felines in the tunnels. “You learn being here which cats prefer the outdoors and which ones would rather be inside. They all have unique personalities. I enjoy watching them interact.”

Sierra’s Haven is the only cat rescue in the Tri-State that houses the felines and is currently home to around 100 cats. The cats wear color-coded collars and are separated based on concerns of overcrowding or for health reasons.

“The pink collars are for girls, and the blue ones for boys,” Smedley said. “Our cats have a lot of ability to roam thanks to the tunnels. But, not all of the tunnels connect to keep any one area from becoming too crowded. We also have a section for cats with feline leukemia. Those cats are quarantined in one enclosure so they can’t infect others.”

While the haven is a better living environment than the one the cats were rescued from, it is not intended to be a permanent home. However, there are some exceptions.

“We want to see all of our animals get adopted into loving homes,” Smedley said. “When we have adoptions, that frees up space for us to rescue more. But, we never put an animal down to make room. We are about saving lives. If one of our cats or dogs doesn’t get adopted, then we are happy to let them live out their life here.”

There are fewer dogs at the haven, and the canines have no tunnel system. Instead they each have individual kennels with a door leading to a small outdoor area. The facility also includes two large running areas where dogs are placed in on a rotating system.

“We have about 60 dogs here right now,” Smedley said. “They can’t get some of the luxuries that our cats get because of their more territorial nature. But, we’ll put two or three that get along in our running areas at a time and make sure every dog gets out there at some point during the day.”

Also when a new dog comes in it is immediately quarantined until it is checked by the veterinary techs for contagious diseases or infections, most notably parvovirus or parvo.

“That’s a major concern of ours,” Smedley said. “Parvo is highly contagious and can be life threatening, and it’s fairly common. So we want to make sure that all our dogs are healthy before they have any potential contact with other dogs.”

Many of the animals come in with some kind of trauma or injury that requires special care. Recently the haven took in a dog named Josephine who was hit by a car.

“Josephine is such a sweetheart,” Smedley said. “She had to have some work done to her, but she is recovering pretty well. She just has a little limp right now but eventually that will go away, too.”

If any health concerns with the animals do arise during health screenings they are handled by vet techs, Terry Craft and Tracy Hoskins. In case of serious medical emergencies, Dr. Gail Counts, the haven’s founder and director, will perform the necessary procedures.

“Dr. Gail handles all of our surgeries when they are needed,” Smedley said. “She just comes up from the Shawnee Animal Clinic and takes care of all the serious stuff. The clinic is right down the road so it’s very convenient.”

Sierra’s Haven operates on the generosity of donations from the public. This past winter things got tight financially for the shelter and it looked as if after eight years of providing animals with a second chance the shelter would close.

“We thought for sure we wouldn’t be able to be open this spring,” Smedley said. “We were literally on our last legs. We do some fundraisers and we get some grants but we can’t survive without donations. When the community found out how much trouble we were in, they stepped up and helped dig us out.”

The community helped the haven bring in more than $30,000, which has allowed the doors to stay open. But, money isn’t the only thing necessary to keep Sierra’s Haven running. The shelter also relies heavily on volunteers like Smedley.

“I started volunteering here after I retired from teaching,” Smedley said. “It takes a lot of people and a lot of time to make this place work. I usually work here every Tuesday and from home everyday by updating our website and looking online for animals who need a home.”

The shelter is flexible with schedules the volunteers have, allowing them to come and help whenever works best for them.

“It’s really just do what you can when you can,” Smedley said. “Every little bit of help we get is important. We get a lot of volunteers from Shawnee State but we are always looking for more help.”

Staying true to its namesake, honoring the memory of fallen companions is one of the haven’s many missions. When a member of the community loses a pet they can buy a brick with the animal’s name on it and have it placed in the walkway to the haven.

“Every one of these bricks is a memorial to someone’s pet,” Smedley said. “Just like this place itself is a memorial to Sierra and her owner. Many of the names you see on the bricks are animals that found their home after being here.”

The Lamplighter is part antique shop, part repair store for those antiques that Price now runs as the second generation... read more