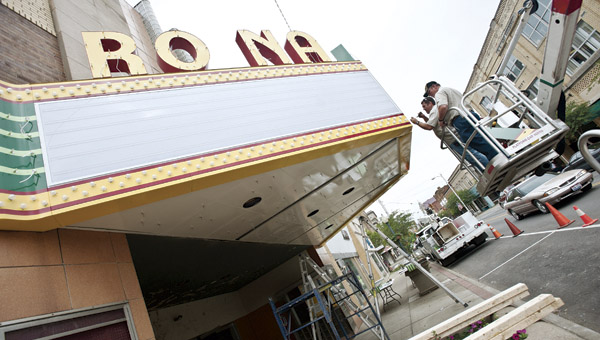 Work to install a new Ro-Na marquee began on May 19 and at 10:30 p.m. on Friday it will be illuminated for the first time.

“We will have an operating marquee in time for our fireworks on Friday,” Rick Jansen, president of Friends of Ironton, said. “After the fireworks we will re-light the Ro-Na.”

The schedule for Friday is as follows:

• 7 p.m. – city celebration at the riverbank, complete with entertainment, concessions, inflatables and vendors;

• 10:30 p.m. – city celebration on Third Street in front of the Ro-Na with J.B. Miller as master of ceremonies;

“This is a great milestone for our city,” Jansen said. “Many of you have worked for years to get this facility back on its feet.”

On Saturday the Ro-Na will be the starting and ending location of the American Legion Post 433 Poker Run. Registration begins at 11 a.m. and the poker run begins at 1 p.m.

“This show is a chance for our communities to honor Bobby Bare for his induction into the Country Music Hall of Fame,” Jansen said. “The money raised from concessions, etc., will be used for Ro-Na improvements.”

Tickets are on sale now at www.ro-natheater.com and will be available at the door for $20 on Sunday. Doors open at 5 p.m., music begins at 6 p.m. with Derailed Band, followed by Ironton Mayor Rich Blankenship at 7:30 p.m. and Bare at 8 p.m.

“We have a lot of things planned for the weekend,” Jansen said. “It’s going to be so much fun.”

Two items are on the agenda for Ironton City Council’s regular meeting on Thursday. One item is the second reading... read more