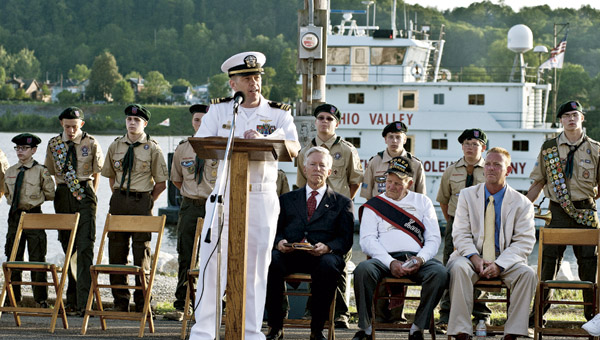 Lt. Cmdr. Matthew Totoro was guest speaker during the Navy Night Memorial Service in Ironton, the first in a series of events in honor of Memorial Day.

The Thursday evening sun shimmered off the Ohio River at the Ironton riverfront as Lt. Cmdr. Matthew Totoro addressed the crowd at the city’s annual Navy Night.

Totoro, who is the commanding officer of the Navy Operational Support Center in Eleanor, W.Va., highlighted important events in the Navy’s 238 year history, starting with the Revolutionary War up through the recent wars in Iraq.

“Your Navy is always there protecting America,” Totoro said. “They are there now. They’ll be there when we sleep tonight and every Saturday, Sunday and holiday. They are there during all of that. Because being there matters.”

Totoro also praised the city of Ironton for its dedication in to honoring the Navy and all those who serve in the United State military.

“I have been here the last two years, watching,” Totoro said. “I have been impressed each year with the way this city honors its servicemen and women. So on behalf of the Navy I would like to say thanks to the City of Ironton for being there for the Navy for nearly 150 years.”

During the ceremony the Ohio University Community Band also performed an ensemble of patriotic songs, while Boy Scout Troop 106 laid a wreath in the shallows of the Ohio River to honor those who died during Naval service.

Navy Night is the official kickoff to the Memorial Day weekend that will culminate Monday with the nation’s longest-continuously running parade.

“This is our first public event of the Memorial Day weekend activities every year,” Common Pleas Judge Charles Cooper, said. “It’s a beautiful night to honor those who have served and I am so glad to share it with the wonderful crowd that came out to be here.”

Symbol of our fallen

It’s one of the more revered equine-related traditions not part of the Triple Crown. A riderless horse is often featured in military... read more