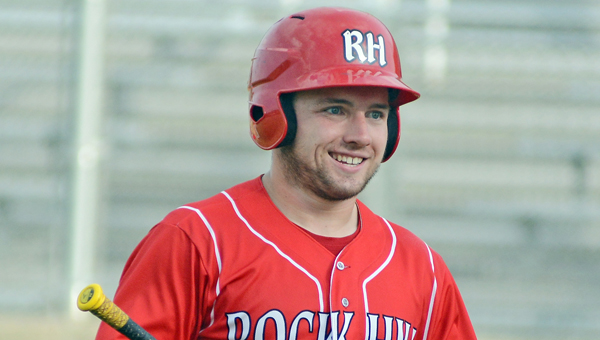 PEDRO — Baseball has always been a great sport that can be shared by father and son.

The Rock Hill Redmen senior standout has not only been fortunate enough to share his baseball experiences with his father, but he’s shared his baseball DNA.

Goodwin’s father Larry is not only the head baseball coach at Ironton, but he also played college baseball at Cleveland State and was later drafted by the Detroit Tigers. Jack said his father has been his greatest influence and biggest supporter.

“My dad has impacted me immensely. He has always been there for me and still continues to help me become who I am today as a player and individual,” said Goodwin.

“But I’m really thankful for the environment I played in, my coaches, my teammates as well as my dad and just for the opportunity to play.”

Following an outstanding high school career and a rating as one of the top players rated by Ohio Prep Baseball Report, the younger Goodwin will follow the base paths to the college ranks as well after signing to play for the Muskingum University Fighting Muskies.

Goodwin made his selection after considering several other options such as Ohio Wesleyan, Otterbein and Marshall.

“I chose Muskingum because athletically and academically they stood out to me as my best option with a great coaching staff and the type of atmosphere that I wanted in the classroom,” said Goodwin who was an all-district academic selection.

Muskies’ head coach Greg Thompson and his staff first became aware of Goodwin at the Class of 2014 unsigned senior games. A series of phone calls, emails and visits led to the eventual offer and signing.

“The coaches expect me to come in and compete, playing third base and outfield and wherever else they may need me,” said Goodwin.

He then added with a smile, “And to bring back a title.”

Goodwin can also play the outfield and is open to the idea. However, he admits that third base is his first choice.

“I prefer third base, but outfield is my second pick. I know what to do and I’m very comfortable and I’m aware of the situations at third base,” said Goodwin.

“Playing third base gets my mind off hitting and you don’t think about if you have a bad first at-bat. It’s an easy way to relax on the hitting part and let things come naturally.”

Goodwin is looking forward to the challenge of college pitching. Opposing pitchers often threw around him as evidenced by more than 40 walks over the past two seasons.

“I had so many walks throughout my high school career. Hopefully when I get to (Muskingum), I’ll get some pitches to swing at,” said Goodwin.

The Muskies were 16-20 this past season including 7-11 in the Ohio Athletic Conference.

Jack is the son of Deana and Larry Goodwin.

Jim Walker jim.walker@irontontribune.com   CHILLICOTHE — The Coal Grove Hornets got the team award, but more importantly they got some... read more