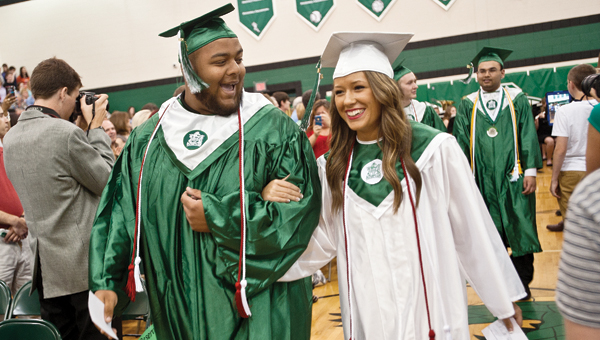 Graduates from Fairland High School are excited as they participate in the processional at the start of commencement exercises Friday.

PROCTORVILLE — Caps, and gowns were adjusted. Picture after picture was taken. There were tears, but most importantly there were smiles. Lots of smiles.

That was the scene moments before Fairland High School’s graduation on Friday night — A bittersweet moment, that culminates four years of high school scholastic achievements as well as opening the door to the future of adulthood.

“Unbelievable,” is how Fairland graduate Chad McComas described the moment. “It’s hard to grasp my mind around the fact that I will never be taking another class at Fairland High.”

“One of the most important values I learned at Fairland has been dedication,” Hankins said. “My cross country coach pushed me past my limits and helped me achieve goals. Schooling was the same way. I had many teachers push me to be more dedicated.”

One hundred and fifty students walked across the stage to receive their diplomas. Fifty of them graduated with honors, and the 2014 class earned $800,000 in scholarship money.

“The students have worked hard over the past four years,” said FHS principal, Chad Belville. “This is my first four-year class since I became principal so they will always hold a special place in my heart.”

Jim Walker jim.walker@irontontribune.com   The Big Red Machine had a lot of great parts that made it motor through opponents... read more