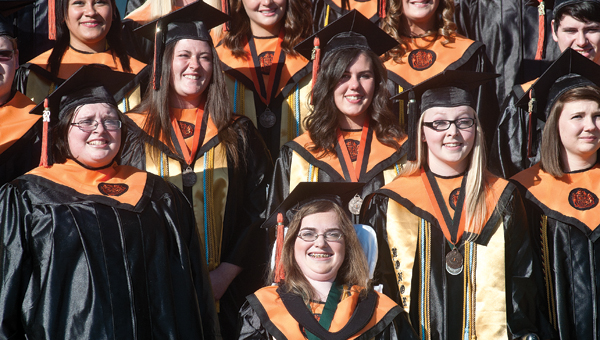 2014 graduate students from Ironton High School gather on the campus’ from steps for the annual class photo before the start of commencement ceremonies Sunday evening.

As the sun began to set over Ironton, 76 seniors took their marks on the front steps of their high school for one last group picture.

Black caps and gowns on, their orange and yellow tassels, honors medals and sashes glistened in the hot sun.

Parents, grandparents, aunts and uncles, siblings and friends were already starting to fill up Tanks Memorial Stadium Sunday to watch the 76 members of the Ironton High School Class of 2014 enter the next stage of their lives — Adulthood.

And the seniors were fully aware that once the evening was over, so was high school.

“It’s refreshing to know you will get a new start,” Charles Evans, senior, said. “A clean slate. No more high school. It’s all up from here.”

Jacob Barber said he was nervous and excited at the prospect of the future and a new life.

Saige Fields, Haley Waldo and Ashton McMackin said the transition out of high school was going to be a good one, but hard because they were all starting new lives in different places.

“Leaving friends will be the hardest,” McMackin said.

Waldo agreed, but said she was looking forward to being in control of her own life.

But are they prepared for college and adulthood?

Fields said she thought so.

“I think the teachers have prepared us,” she said. “At least the main subjects.”

Logan Ratliff said graduating was like beating the tutorial stage of a video game.

“You’ve been taught all the basics to what you have to do in society,” he said. “Now you can apply those to your life. Carve out your own little place in the world.”

Joe Rowe, IHS principal, said there were many leaders in the Class of 2014.

“They are definitely going to go on to do great things,” Rowe said. “This is not the end, but only the beginning of their new lives.”

Rowe said the Class of 2014 was awarded more than $1 million in scholarships and there were 10 honors graduates with GPAs over 4.0.

Superintendent Dean Nance also said he believed the students would be successful.

“They are a group of leaders,” he said. “It has been a pleasure watching them grow and mature.”

Nance said the Class of 2014 was kindergarteners when he first became superintendent and has watched them all grow up.

“I have a special place in my heart for them,” Nance said.

Bennie Blankenship held the American flag with his head bowed during the invocation at the Veterans Memorial Service at Woodland... read more