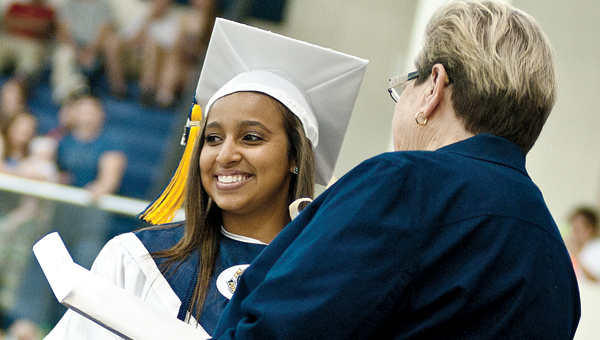 SOUTH POINT — Ryan Van Steenberg got to South Point High School early. After all, as the salutatorian he wanted to make sure he had his speech down pat.

After he picked up his diploma on Sunday, Van Steenberg planned to enjoy the summer, and then head off to Bowling Green State to study computers with the goal of working in information technology.

What words of advice did he have for his fellow classmates?

“I just hope everybody does good in whatever they do in life,” he said.

South Point’s graduation was the second in two days for Donna Moss. She watched her grandson, Jerrod Browning, get his diploma from Chesapeake on Saturday. On Sunday it was Jerrod’s twin, Joshua who was center stage.

“I feel great,” she said, bearing presents for Joshua, including a gift card and a stuffed bear that played “Pomp and Circumstance.”

Andrea Rooks was excited, but a little concerned she might fall on stage. She plans to attend Mountwest Community and Technical College to study criminal technology, already getting a taste for the field from her forensic classes at Collins Career Center.

There were 121 students graduating from South Point this year winning close to $500,000 in scholarship money.

“That has always been my passion,” she said. “It is my biggest interest. I want to do whatever comes along when I get my foot in the door.”

Kaitlyn Brown lost her father, Kevin Brown, a few years ago, so to honor him, she had his name airbrushed to the top of her cap.

“My dad was my best friend,” she said.

Her proud mother, Angie Black, said she was excited to see her only child graduate and be the recipient of a softball scholarship to go to Rio Grande University. There she will study to be a veterinarian.

As South Point principal Jayshree Shah watched the students file into the high school, she lauded the Class of 2014 for its perseverance.

“This class has overcome a lot of obstacles,” she said. “I am proud of them. This is a very determined class.”

2014 graduate students from Ironton High School gather on the campus’ from steps for the annual class photo before the... read more