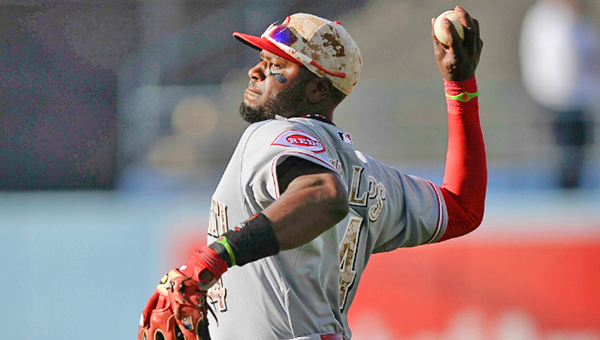 Cincinnati Reds’ second baseman Brandon Phillips throws out a runner during Monday’s game against the Los Angeles Dodgers. LA pitcher Hyun-Jin Nyu had a perfect game through seven innings before the Reds scored three runs in the eighth but left the bases loaded in a 4-3 loss. (Photo Courtesy of The Cincinnati Reds)

LOS ANGELES (AP) — As each 1-2-3 inning went by for the Cincinnati Reds against Hyun-Jin Ryu, the urgency to get someone on base became more intense.

Finally in the eighth, Todd Frazier lined the left-hander’s 1-0 pitch down the left-field line for a leadoff double and Cincinnati’s first baserunner. The Reds scored three runs against Ryu and Brian Wilson that inning, but it wasn’t enough.

Brandon Phillips struck out with the bases loaded against Los Angeles Dodgers closer Kenley Jansen to end the rally, and Devin Mesoraco stranded two more runners in the ninth with a fly to center against Jansen. The Reds lost 4-3 on Monday, their 13th one-run defeat of the season.

“We stayed positive in the dugout and were able to keep life in there,” right fielder Chris Heisey said. “Everybody was picking each other up, and there was a lot of confidence. You’ve got to keep battling. When a guy’s on his game like he was, you’ve just got to tip your cap. Finally he made some mistakes, and we were able to get some baserunners and score a couple of runs.”

It was another frustrating night for Johnny Cueto (4-4). The right-hander allowed four runs and four hits over 6 1-3 innings, but three of the runs were unearned because of fielding errors by Frazier at first base in the third and shortstop Zack Cozart during the Dodgers’ three-run seventh.

“Johnny pitched well. It’s a shame,” Heisey said. “I know we have not done a great job scoring runs for him this year, and it’s frustrating. The guy’s pitching his tail off for us and keeping us in every game.”

Ryu (5-2) ran the bases and scored during the Dodgers’ seventh-inning rally, which lasted more than a half hour. Maybe that took something out of him as he tried to make Los Angeles the first major league team to throw consecutive no-hitters, following Josh Beckett’s 6-0 gem Sunday in Philadelphia.

Ryu, who has won all six career starts against Cincinnati, handed a 4-1 lead to Wilson and was charged with three runs and three hits in 7 1-3 innings. Only three balls were hit out of the infield off Ryu through seven innings, but Dodgers third baseman Justin Turner, filling in for injured Juan Uribe, robbed Cozart of hits his first two times up with diving stops.

Turner also worked out a 16-pitch walk leading off the seventh, frustrating Cueto even more than his lack of run support.

“When push comes to shove, the guy who really stood out today was Turner — making a couple of great plays on the infield to deny us hits,” Reds manager Bryan Price said. “And then his 16-pitch at-bat that really took a lot of the starch out of Johnny in the seventh and led to their big inning.”

Heisey’s sacrifice fly delivered the Reds’ first run in the eighth. Ryu faced one more batter, giving up a single to Brayan Pena, before giving way to Wilson. The right-hander struck out his first batter, but walked pinch-hitter Skip Schumaker and gave up a two-run double to right-center by Billy Hamilton.

“We hit a couple of balls hard,” Heisey said. “(Ryan) Ludwick hit a rocket to the center fielder, and Turner made a couple of nice plays in the hole against Cozart. But other than that, we really weren’t putting great at-bats together — myself included. (Ryu) was locked in, trying to make perfect pitches to try to keep us from getting a baserunner. And once we did that, we were able to get to him a little bit.”

Schumaker, representing the potential tying run, slammed on the breaks rounding third on Hamilton’s double as coach Steve Smith held him up. Right fielder Yasiel Puig made a key defensive play by cutting off the ball in the gap.

The relay from second baseman Dee Gordon was up the first base line and bounced a few feet away from catcher Drew Butera. But by then, it was too late for Schumaker to score.

“Steve absolutely made the right decision. I mean, you can’t just run into an out there. That wouldn’t have been a smart baseball play at all,” Price said. “We still had an opportunity there to keep hitting. The thing about these situations, when you’re under .500 and trying to create a winning streak, is to not start to do things that are so far out of character that you force your way into making bad decisions.

“When the ball bounces away, everyone goes, ‘Aw, shoot, he should have sent him.’ Well, you can’t anticipate that. I mean, it was a fairly routine throw from the cutoff man. And if the guy made an accurate throw, then Shoemaker’s out by five or six strides.”

NOTES: The only other team since 1974 to have a no-hitter through seven innings in back-to-back games was the Oakland Athletics on July 14-15, 2005, against Texas, according to STATS. … Dodgers pitchers threw a club-record 17 straight hitless innings dating to Saturday, when Paul Maholm pitched the eighth in their 5-3 loss to the Phillies. The only other club since 1974 to pitch 17 straight hitless innings was the Los Angeles Angels from May 1-3, 2012, including Jered Weaver’s no-hitter, STATS said. … Ryu was 0-2 with a 9.00 ERA in his three previous home starts this season.

JACKSON, Miss. (AP) — Years before Jackie Slater was a Hall of Fame offensive lineman, he was playing for Wingfield... read more