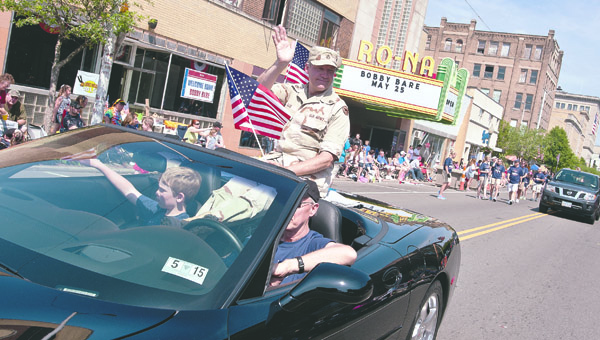 THE TRIBUNE/JESSICA ST JAMES
A serviceman with the U.S. Army waves to the crowd during the Ironton-Lawrence County Memorial Day Parade Monday.

Streamed live on the Internet by the electronic media department at Ohio University Southern as well, the parade themed “Our Troops and Families” was seen by people all over the country who couldn’t make it to a spot on the sidewalks on Monday.

Held continually since 1868, this year’s parade had more than 1,800 participants in 12 divisions. It is estimated that 30,000 spectators lined the parade route to watch.

Ronnie Harvey, 68, of Ironton, has attended every one his job has allowed.

“What makes the parade for me is the El Hasa Shrine Temple,” he said. “They do a great job. Everyone does a great job. This parade is one reason I’m proud to be from and live in Ironton.”

The parade continues to appeal to everyone it seems regardless of race, sex, religion, age or place of residence. Matt McCormick, 28, of Kenova, W. Va., said he would have been at the parade anyway, but his 3-year-old daughter, Myleigh, was attending for the first time.

“If I’m in town I’ll be here,” he said. “Plus (Myleigh) loves parades and I told her if that she wouldn’t get to see one better than this.”

Myleigh said her favorite part of the parade was the fire trucks, clowns and, of course, the candy.

Income survey set for this week

CHESAPEAKE — As the county looks to the eastern end as its latest focus for capital improvement, surveys must be... read more