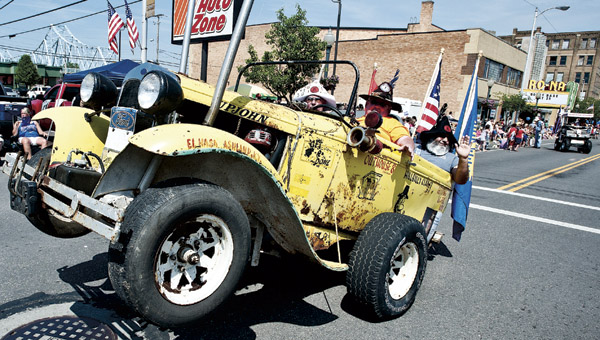 Members of the El Hasa Shriners show off their funny cars while taking part in the annual Memorial Day Parade in downtown Ironton.

The Ironton-Lawrence County Memorial Day Parade has been held for 146 years. However, the 2014 version of the celebration to America’s fallen troops was the first witnessed internationally.

Thanks to a partnership among Time Warner Cable, the City of Ironton, Ohio University Southern and The Tribune, the parade was available online via a live stream. Streaming the event allowed for people across the globe to take in the parade as it happened. “It was a great success,” Don Moore, director of electronic media at OUS, said. “People from around the world tuned in. We had viewers in Japan, England and Germany — plus several families at military bases throughout the country tuned in.”

More than 2,500 people watched the parade live on the webcast, according to Google Analytics, and nearly 1,500 more have watched the archived version. Many of the viewers took to the comment section of the stream to voice their appreciation of the Internet broadcast.

“It was wonderful to be able to watch this year when we couldn’t attend,” Kym Owens, an Ironton native whose husband is in the Army, wrote. “Thank you for including us in the day no matter where we were located.”

“I marched in the parade way back in the olden days when I was a junior in high school at Rock Hill,” Laura Dalton Wilson wrote. “We carried flags we had collected from every state in the Union.”

Eight students from OUS’s electronic media department devoted their holiday to making sure the parade’s festivities were broadcast.

The school’s broadcast team has also made a tape delayed version available and it will air later this week on Time Warner Cable.

“It will begin airing on OUS Channel 25 and 96.4 on the Time Warner system,” Moore said. “The first broadcast will be Wednesday evening and it will air several more times over the next couple of weeks.”

The archived version of the parade in its entirety is also still available online by visiting http://new.livestream.com/OHIOsouthern/memorialday.