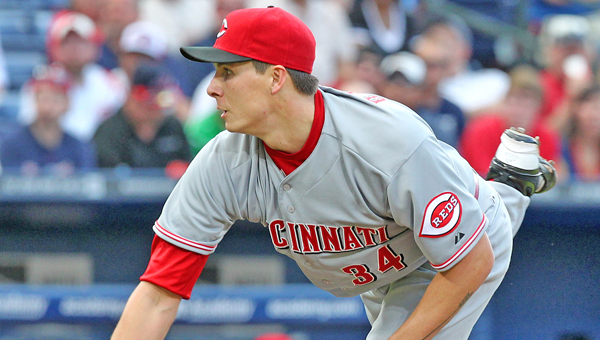 LOS ANGELES (AP) — Brandon Phillips gets as much of a charge out of making a defensive gem to save a run as he does hitting a home run. Wednesday night, he was able to do both in the same inning to help the Cincinnati Reds pin a frustrating loss on two-time Cy Young Award winner Clayton Kershaw.

Phillips and Homer Bailey’s seven effective innings led the Reds to a 3-2 victory over the Los Angeles Dodgers on Wednesday night.

“Regardless of who was pitching, it feels good just to come through for the team and do something positive to get us going in the right direction,” Phillips said. “We haven’t been really scoring that many runs and haven’t been getting many clutch hits. Kershaw’s one of the best pitchers in the game, but tonight we just hit some mistakes.”

Phillips, a four-time Gold Glove second baseman, robbed Andre Ethier of an RBI single when he made a diving stop of his grounder in the hole and threw him out after a leadoff double by Dee Gordon. Bailey escaped the inning unscathed by striking out Yasiel Puig and Hanley Ramirez.

“I feel like defense wins championships and offense sells tickets,” Phillips said. “That defensive play I made really saved the game. I’m surprised I got to that ball. I didn’t really see it come off the bat really good.”

Bailey (5-3) allowed two runs and five hits while striking out six. The right-hander has won consecutive starts for the first time this season following his 5-3 victory over St. Louis last Friday.

“It was good for me, especially with the April I had,” Bailey said. “Obviously it’s not how I wanted to start the season. It took a little while to get my legs underneath me. I would have liked to put up a few more zeros, but doing it against Clayton — and the fact that we scored three runs — you just make sure you lock them down. It was a really big win. We needed that one. You don’t ever want to get swept. I don’t care where you’re at or who you’re playing.”

Ethier, who drove in a season-high four runs Tuesday night, was 0 for 3 against Bailey and is hitless in 21 career at-bats against him with seven strikeouts.

“He was just moving the ball so well,” Ethier said. “He’s one of those guys who can be wildly effective at times, and other times he can spot up a pitch and throw something in there at 93-94 — then reach back for 96-97 — and it’s moving all over the place. He can throw his other pitches for strikes, too, so it’s a tough combination. In the past, I’ve seen a lot of cutters from him, and tonight I didn’t see one. It was all two-seam fastballs and one breaking ball.”

Puig, who has reached base safely in 29 straight games, led off the Dodgers’ sixth with an opposite-field homer to right-center that narrowed the gap to 3-2. But former Dodgers closer Jonathan Broxton retired Puig and Ramirez on flyballs for the last two outs in the eighth after replacing Manny Parra with a runner at second, and Aroldis Chapman pitched a perfect ninth for his fifth save.

Kershaw (3-2) allowed three runs and seven hits in seven innings and struck out nine. He retired 14 of his next 16 batters after Phillips’ homer.

The left-hander, who led the majors in ERA in each of the previous three seasons, has a 3.57 mark through his first six starts this year. He missed all of April because of a strained muscle in his back, after beating Arizona March 22 during the Dodgers’ season-opening two-game trip to Australia.

Matt Kemp, who hadn’t started a game in left field since his rookie year, was back there Wednesday on the eighth anniversary of his major league debut. It was his eighth career start in left, and first since June 21, 2006.

Todd Frazier doubled over Matt Kemp’s head leading off the sixth and scored on a wild pitch to give Cincinnati a 3-1 lead.

Only one of the last 34 home runs Kershaw has given up has been with more than one man on base. That was a three-run shot by former Seattle catcher Miguel Olivo, who eventually joined the Dodgers in January as a free agent — and was released last week after biting off a piece of Triple-A Albuquerque teammate Alex Guerrero’s left ear during a dugout brawl.

NOTES: Hall of Fame broadcaster Vin Scully was back in the Dodgers’ TV booth after missing two games because of a chest cold. … Canadian-born OF Jamie Romak, promoted from Triple-A Albuquerque because of Crawford’s injury, pinch-hit for Kershaw in the seventh and grounded out to second on the first pitch he saw in the major leagues. … Dodgers RHP Brandon League retired both batters he faced. He hasn’t allowed an earned run in a career-best 22 innings spanning his last 16 appearances.

Jim Walker jim.walker@irontontribune.com   LANCASTER — It was two for one. On the first day of the Division III regional... read more