When grass comes up, turf goes down 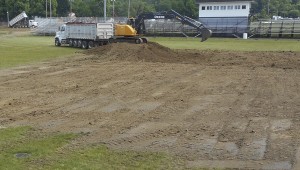 the tribune/brandon roberts
Workers from Maryland-based artificial turf company Pro Grass on Tuesday began scraping up the grass on Bob Lutz Field at Tanks Memorial Stadium in Ironton. Once all the grass is up the company will install artificial turf. The project’s completion is expected before Ironton’s first football game on Aug. 30 against Ashland, Ky.

The first game of Ironton’s 2014 football season on Aug. 30 against Ashland will have a different look to it. From a players’ perspective, a different feel as well

The efforts of civic and business leaders to install turf on Bob Lutz Field at Tanks Memorial Stadium came to fruition on Tuesday when the process of removing the field’s existing natural grass began.

“Pro Grass is the name of the company doing the work,” Dean Nance, superintendent of Ironton Schools, said. “Ironton’s field is the only field this company has installed turf on in Lawrence County.”

The nearest field with turf from Pro Grass is in Chillicothe.

In 2011, a volunteer group comprised of civic and business leaders calling itself the Ironton High School Turf Committee was formed. In 2013, that committee merged with the existing Tanks Memorial Stadium Committee (TMSC) for the common goal of replacing the grass with field turf. The cost of the project is $600,000.

“The problem remains, however, that only half of the necessary funds have been secured,” Nance said. “As a result, the TMSC has stepped up to borrow money to ensure the project will be completed this year.”

Donations and pledges toward the project are still being sought.

“Contributions and pledges have been received from private citizens, area businesses, school employees and through donations from special projects,” Jodi Rowe-Collins, executive vice president of Citizens Deposit Bank and TMSC member, said. “TMSC continues to gather pledges for the turf project with installments up to five years.”

Now is the time for those who have not made a donation or pledge to do so, Nance said.

“This stadium and its past, while serving as the home field for Ironton High School, is an important part of the spirit of our community,” Nance said. “To date, nearly $300,000, or half of the total project cost, has been collected.”

The turf is expected to have a lifespan of 10 years, which will save the school district significant money annually in field maintenance and provide greater flexibility to utilize the field throughout the year.

“For many families who have long been a part of the Ironton community, there is a link among generations of football players and fans,” Nance said. “The Ironton tradition will continue throughout many future generations.”

Tanks Memorial Stadium is the only semi-professional, covered-seating stadium remaining in the State of Ohio.

“Over the past few years the advancements made in artificial turf have been substantial,” Mark Vass, head football coach, said. “With the rubberized base the surface has the benefits and feel of natural grass but without the upkeep. Drainage is much improved. These new turf fields are less abrasive than ones even a decade ago, and now most playoff games are played on artificial turf fields. It will mean a great deal to our program and our future.”

Rowe-Collins said a donation or pledge for this project recognizes a storied past.

“At the same time, it honors the present and prepares for the future,” she said. “Tanks Memorial Stadium is an integral part of the quality of life we share in Ironton.”

All donations are tax-deductible and should be made to the Tanks Memorial Stadium Fund Inc., 807 S. Third St., Ironton, Ohio 45638 or contact any member of the TMSC, school administration, athletic director Mark LaFon or Vass.

Under the leadership of Bob Lutz, the Ironton Tigers claimed state championships in 1979 and 1989, were state runners-up six times and participated in the OHSAA playoffs 24 times in his 34 years of coaching, during which he won 361 games, the most in Ohio high school history.

ASHLAND, Ky. — In what is being called the largest federal health care fraud settlement involving a hospital in the... read more