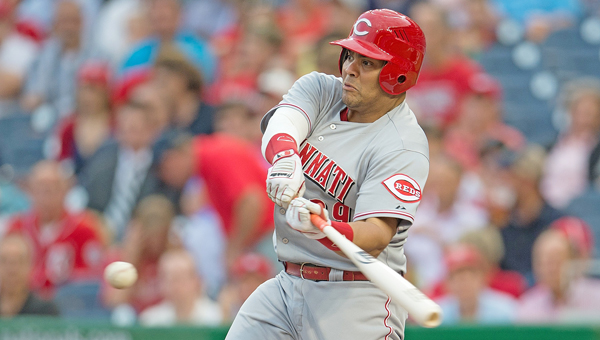 Cincinnati’s Brayan Pena had two of the Reds’ three hits in a 4-0 loss to the Arizona Diamondbacks Thursday. Arizona pitcher Josh Collmenter faced the minimum 27 batters as he pitched a complete game. (MCT Direct Photos)

PHOENIX (AP) — The Cincinnati Reds have had trouble converting with runners in scoring position.

They got one chance against Josh Collmenter and the Arizona Diamondbacks — and he was thrown out trying to tag up.

Cincinnati’s struggling offense took a new turn Thursday night, when Collmenter faced the minimum in a three-hitter that sent the Reds to a 4-0 loss to the Diamondbacks.

“We didn’t barrel many balls,” Reds manager Bryan Price said. “In part credit to him and in part a testament to the fact that we haven’t been swinging the bats very well. Not just recently for the bulk of the year. We have to be the ones to make the adjustment. “

Collmenter was sharp and got plenty of help from his teammates.

Aaron Hill, who went 1 for 10 in a three-game series against San Diego, had three hits, including a solo homer in the sixth inning off Tony Cingrani (2-5).

A.J. Pollock had a double, a triple and scored two runs from the leadoff spot, and Martin Prado added a late run-scoring single.

The defense was stellar, making a handful of spectacular players and erasing the runners who did reach base.

Collmenter (4-2) was sharp from the first pitch, breezing through his first career complete game by mixing speeds and hitting both sides of the plate.

He didn’t quite match Johnson, who had a perfect game in 2004 against Atlanta, but faced the same number of hitters. Collmenter also becomes the 13th player since 1914 to allow three or more hits and face the minimum 27 batters in a nine-inning game.

“He was just kind of in the zone, throwing his pitches right where he wanted them,” said Arizona manager Kirk Gibson, whose team has won five of seven.

The Reds had a runner at second once against Collmenter, when Brayan Pena double to lead off the third inning for their only extra-base hit of the night. He didn’t get very far, though, thrown out at third after tagging up on a flyball to center.

Cincinnati was shut out for the sixth time this season and has now lost five of six.

Collmenter has been on a roll over the past month, going 3-0 with a 3.60 ERA in six starts.

The over-the-top-throwing right-hander kept it going against the Reds, with help from his defense.

The Diamondbacks turned three double plays behind him, including a catch-and-throw by Pollock in center to get Pena at third in the second inning.

Hill also had a diving stop up the middle to rob Todd Frazier of a hit in the seventh inning and made a tough stop on a grounder by Pena in the ninth.

Collmenter struck out five and walked none to win his third straight start and fourth straight decision.

“He made quality strikes and got bad contact,” Diamondbacks catcher Tuffy Gosewisch said. “They hit a few balls hard and we played great defense and turned a double play here and there.”

The Reds ended a four-game losing streak on Wednesday, when Homer Bailey outpitched two-time Cy Young Award winner Clayton Kershaw in a 3-2 victory over the Dodgers.

Cingrani wasn’t quite as good, though managed to limit the damage.

The left-hander had struggled a bit since coming off the disabled list (shoulder), allowing four runs in each of his past two starts.

Arizona scored a run off Cingrani in the first inning, when Pollock led off with a double, stole third and scored when catcher Devin Mesoraco’s throw bounced into left field for an error.

Hill hit a solo homer to left in the fourth inning, his fifth of the season, and chased Cingrani with a run-scoring single up the middle in the sixth.

“I was just trying to get my rhythm going and build off each outing and try to find my groove,” Cingrani said. “I will hit it sooner or later.”

NOTES: Diamondbacks C Miguel Montero, who leads the majors with 48 games caught, was given the night off. … The error by Mesoraco in the first inning was the 24th by the Reds, still fewest in the majors. … Arizona RHP Bronson Arroyo, Friday’s starter against the Reds, played the previous eight seasons in Cincinnati. He is 3-1 with a 1.90 ERA his last six starts. RHP Mike Leake will start for Cincinnati after allowing two runs in six innings of a 2-0 loss to St. Louis his last start.

Porter gets trip to state