The chickens have landed 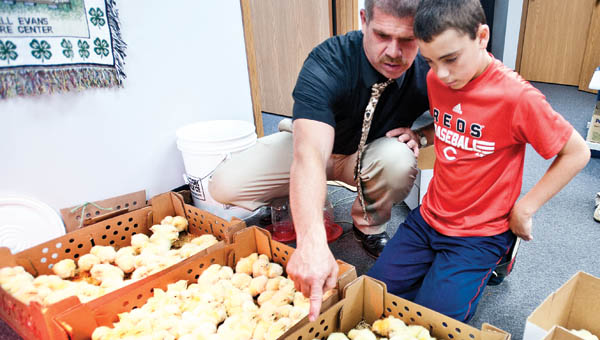 Mike Patterson shows his son, Eli, how to pick up chicks as they select 30 for members of their 4-H club Friday in the extension office at the Lawrence County Courthouse.

On Friday morning some of the first makings of the Lawrence County Fair arrived through the mail to the courthouse in Ironton.

The chirps of 330 baby chickens coming from inside the 4-H extension office filled the lobby of the courthouse. The chickens were ordered for 33 children between the ages of 9-18 who are members of the Lawrence County 4-H or the Future Farmers of America.

“Each child will get 10 chicks,” Rachael Fraley, 4-H extension educator, said. “They’ll raise those 10 chicks over the next month or so and take their top two to the fair.”

“This is the only project we actually order and bring animals in for the kids,” Fraley said. “All the other animals like the hogs, have to be acquired by the children on their own.”

The cost of the 10 baby chicks is just $14, and the lessons learned through the process are valuable ones, Fraley said.

“The whole process teaches work ethic,” she said. “To take a living creature and raise it from the time it is 2 days old teaches a lot of responsibility. We try and do that with all of our programs. We want to focus and teach life skills and things of that nature to all of the children in 4-H.”

The Lawrence County Fair begins on Friday, July 4, and ends the following weekend. For more information on the fair, or the 4-H events at the fair visit www.lawrencecountyohiofair.com.

Cincinnati outfielder Skip Schumaker makes a catch in the first inning of the Reds 4-3 win over Arizona on Sunday.... read more