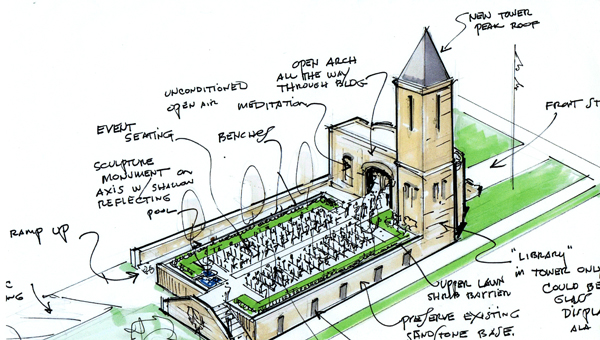 It was July 2013 when an ordinance that set in motion the demolition of Memorial Hall had its first reading during a regular meeting of Ironton City Council.

The ordinance called for the removal of all debris with the exception of the large stones that exist in the tower and lower-level walls.

City officials and community leaders, however, took the steps necessary to ensure the structure remains as important to the city’s future as it has its past.

In August 2013 Assistant Executive Director of the Ironton Lawrence County Community Action Organization Ralph Kline brought a conceptual drawing to the very Ironton City Council meeting at which the ordinance to advertise for bids to demolish the property was adopted unanimously.

“When America In Bloom came in about three years ago with the evaluation of the community, one of their key suggestions was to create more green spaces, pocket parks, within the downtown to make it more amenable to residential and development,” Kline said at the meeting.

The rendering Kline presented showed a new roof on the tower and an open archway through the building. What was once the interior of Memorial Hall would be open-air green space with room for seating enclosed by the sandstone base of the building. The lower level windows would be filled in using memorial plaques, according to the rendering.

Members of Ironton In Bloom attended that August 2013 meeting and offered their support for the project.

This past March Ironton Mayor Rich Blankenship told council the city hadn’t received any bids for the demolition project for what he felt was a “safety issue” and the “amount of money we have to pay for it.”

The city engineer estimated the cost of the demolition at $128,000; an amount Blankenship said would not be outside the realm of possibility if the project entailed tearing the structure down completely.

“Saving what we want to save is what costs so much money,” Blankenship said in regard to keeping the tower and other existing sandstone. “I can see the contractor’s concerns, but we’ll press on.”

Council then rebid the project and the estimated five-week long demolition of the dilapidated structure by Southern Ohio Salvage began this past Wednesday.

“I really hate to see it get torn down,” Blankenship said. “This just needs to get done. Regardless of what this area becomes, Memorial Hall will always be part of Ironton.”

Blankenship praised the idea of leaving the tower and existing stone walls for the purpose of creating the aforementioned veterans memorial park.

The 10th and Vine Church of Christ in Ironton is now taking applications for its 2014-2015 mini-school program. Beginning in... read more