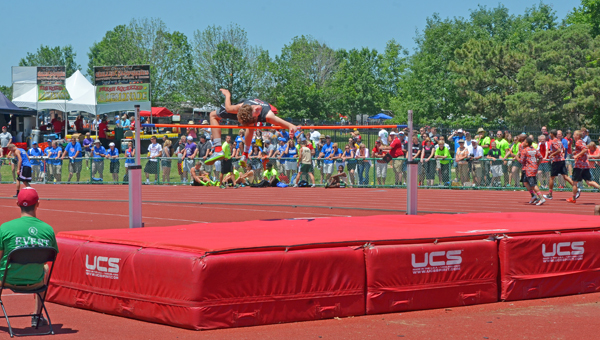 With a mild breeze in his face, Adkins got the elevation he needed as he set a personal record and tied a school record by clearing 6-feet, 8-inches to win the state high jump championship.

Adkins edged Ben Olewiler of Ashland Crestview who went 6-7. Zach Garver of Liberty-Benton was third at 6-6 and Seth Donohoe of Triad was fourth at 6-5.

“I was just trying to stay focused and not be nervous. I knew I was going to be in the top group, but not 6-8,” said Adkins.

“When I got up higher, I wanted to win the state and set a school record.”

Adkins had missed on his first attempt at 6-5 but cleared it easily on the second try. Adkins, Olewiler and Garver all cleared 6-6 before Garver missed all three attempts at 6-7 and setting the stage for the showdown between the two top jumpers coming into the state meet.

Adkins also runs the 800 meters and was on the Hornets’ 4×800 relay team during the regular season and the first two rounds of the postseason.

“I thought that helped a lot,” Adkins said of participating in one event.