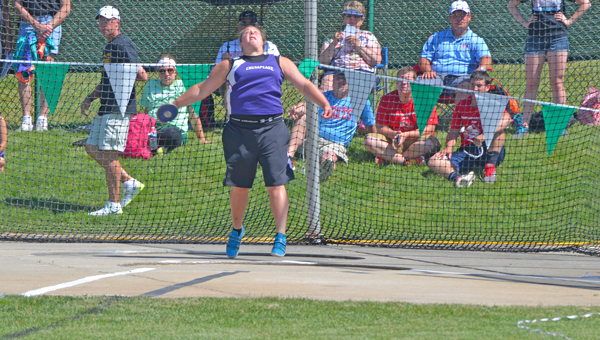 COLUMBUS — After a few days at the beach, Jordan Porter decided to bask in the glow of the state track meet.

The Chesapeake Lady Panthers senior track standout spent the first part of the week at Myrtle Beach on a senior trip, then flew home on Wednesday to practice before heading to the Ohio High School Athletic Association Division II state track meet.

The few days of rest and relaxation must have worked as Porter won the state discus championship Friday at Jesse Owens Memorial Stadium.

“I worked hard at the regional and district. This week I only worked on Wednesday,” said Porter.

“It feels good. I put a lot of work in it over the summer. It just shows how hard work pays off.”

Porter threw 137-feet, 8-inches on his fifth attempts and second in the finals to win the state title.

She also had the top distance in the preliminaries with a toss of 128-9 on her first attempt.

Nicolette Kreatsoulas of Poland Seminary was the runner-up with a 127-10 distance that came on her second throw of the event. She also threw 126-3 on her first attempt.

“I was nervous but I knew I could pull off a decent throws. I wanted to win. I think being here last year (in the shot put) helped me. (Friday) I was more relaxed,” said Porter.

“I’ve had to step it up in the discus a lot more.”

The state title caps off a high school career and springboards her into college competition. Porter signed last month with Ohio University over an offer from Louisville.

Saturday morning Porter returned to the state meet to compete in the shot put and placed fifth with a heave of 43-feet and one-half inch.

The throw came on her third attempt in the preliminaries. She fouled on all three attempts in the finals.

“The shot was a little tougher. There are a couple of girls who threw well. The shot is my main event. There’s a lot more pressure on me,” said Porter.

Jim Walker jim.walker@irontontribune.com   COLUMBUS — A good season for some local track athletes came to an end at the... read more