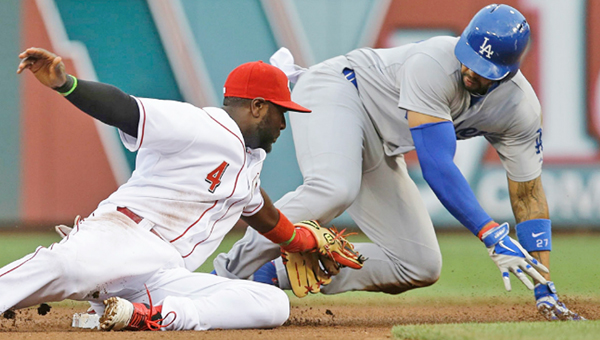 CINCINNATI (AP) — Another tough game for Tony Cingrani has the Cincinnati Reds wondering what to do with the only left-hander in their rotation.

Scott Van Slyke drove in a career-high four runs with two homers off Cingrani, and the Los Angeles Dodgers pulled away to a 6-2 victory over the Reds on Monday night, a rare comfortable win in their pitching-dominated series.

Van Slyke hit a solo homer and a three-run shot off Cingrani (2-7), who could lose his spot in the rotation when Mat Latos returns from the disabled list later this week. Cingrani gave up a career-high six runs in 4 2-3 innings of his fifth straight loss.

The Reds could move Cingrani into the bullpen or send him back to Triple-A to get his game back in shape.

“It’s a tough thing,” manager Bryan Price said. “When we add Mat, we’ll have 13 major league pitchers for 12 spots. That’s not to say Cingrani won’t be part of the process.

“We’ll be making a very difficult decision. We’ve been discussing things, and we’ll be coming up with a decision in the next few days.”

Dan Haren (6-4) gave up five hits in 5 1-3 innings, including Ryan Ludwick’s solo homer, for his first win since May 12. Brandon League escaped a bases-loaded, no-outs threat in the eighth by getting Ludwick to hit a comebacker that led to a home-to-first double play.

The Dodgers have gone 3-1 at the start of their seven-game trip to Colorado and Cincinnati despite hip injuries to right fielder Yasiel Puig and second baseman Dee Gordon. Puig was back in the lineup on Monday and had a single and a walk. Gordon pinch hit in the ninth and beat out an infield single.

The Dodgers and Reds have played a lot of close games the last two seasons. Six of their last seven had been decided by one run, with Cincinnati holding a 4-3 advantage in those games.

Van Slyke made this a comfortable win for the Dodgers, getting a career-high three hits. In addition to the homers, he singled and walked twice, reaching base in all five plate appearances.

The center fielder came into the game with four homers and seven RBIs. He led off the second inning with a homer and ended Cingrani’s outing with a three-run shot in the fifth that made it 6-2. It was his second career two-homer game.

Cingrani has struggled since he returned from an inflamed shoulder that landed him on the disabled list. He’s 0-5 in those five starts with a 6.26 ERA and nine homers allowed. The left-hander gave up seven hits — matching his career high — and three walks on Monday.

Cingrani’s fastball has been inconsistent since his return. He’s been hurt by one bad inning in his last few starts.

“It could be anything — maybe focus,” he said. “I don’t know. It’s frustrating.”

The Reds fell to 3-4 on their 10-game homestand, leaving them fourth in the NL Central.

Haren had one rough inning, helping the Reds tie it 1-all in the second. Brayan Pena snapped a career-worst 0-for-17 slump with a single, and Zack Cozart singled. The runners advanced on a wild pitch, and Pena scored when Haren bounced a pitch to Cingrani with two outs.

NOTES: Josh Beckett (3-3) makes his first appearance against the Reds since 2008 on Tuesday. The Reds start Mike Leake (3-5), who has been limited by a sore neck and is coming off his shortest appearance of the season. … OF Andre Ethier was out of the Dodgers lineup getting a planned day of rest. … Van Slyke hit two homers against Atlanta on May 17, 2013. … Two ducks landed in center field and stayed for an inning. Van Slyke tossed some sunflower seeds to them. … Ludwick is 7 for 12 career against Haren with three homers. … Latos made his final rehab start for Triple-A Louisville on Monday night and threw 81 pitches before a rain delay. The right-hander has been sidelined all season while recovering from torn knee cartilage and a strained pitching forearm. Alfredo Simon, his replacement in the rotation, leads the team in wins with an 8-3 record.

PORTSMOUTH — The Fifth Annual Gene Bennett Baseball Classic, which will be sponsored by Shawnee State University for the third... read more