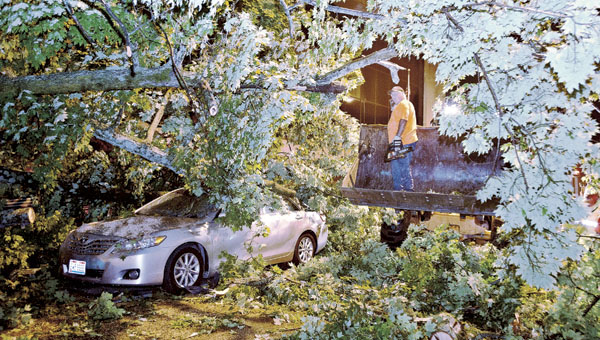 THE TRIBUNE/JESSICA ST JAMES
Members of the City of Ironton street crew clear off a gigantic tree on Fifth Street in between the county jail and Lawrence County Courthouse following a storm Tuesday evening. One of the two vehicles hit by the tree was a Hanging Rock Police truck.

The night shift of deputies with the Lawrence County Sheriff’s Office was watching a storm coming through as they stood in the salley port Tuesday night, when it happened.

Crack. Crack. Splinter. Crash. Thud. And a 30-foot tree that has stood on the Fifth Street side of the Lawrence County Courthouse for decades came a topplin’ down. It dropped right across Fifth Street smashing into a Hanging Rock Police vehicle parked by the sheriff’s office.

No injuries were reported except a few scratches on the two women who were momentarily trapped in their car.

Crews from the Lawrence County Engineer’s Office were out all night after the storm hit at 8:30 p.m.

“At this point we have well over 30 trees down,” County Engineer Doug Cade said at 7:30 this morning. “We had two crews out all night long.”

Many of the trees brought down power lines leaving on Tuesday night approximately 8,000 customers without power in Lawrence County. By 8:15 a.m. Wednesday that number was cut to 3,618 customers. Crews will have to wait until the power company pulls those lines back up before they can clear out the downed trees.

“The storm blew pretty quickly and the destruction was pretty widespread,” Cade said. “It really wasn’t that much rain, just a pretty strong wind storm. About 10 till 9 we started getting calls. The destruction was countywide literally.”

That translates to a long day following a long night for the county road crews.

“We will be out all day to continue to remove the trees,” Cade said.

Despite the power of the storm the National Weather Service reports it was not a tornado and only dropped about a quarter of an inch of rain.

“It was basically a line of several thunderstorms that had a good wind gust out ahead of it,” John Sikora, meteorologist, said. “The cells bowed out and that is indicative of a strong wind storm.”

And it could happen again today, Sikora said.

“Activity will start firing up this afternoon for much of the area,” he said. “We could fire up thunderstorms this afternoon and this evening. They could become severe with pretty good downpours.”

The Earth’s climate is getting warmer, and humans are responsible. That’s not my opinion. That’s a fact supported by more... read more