Reds get that old feeling in win over LA 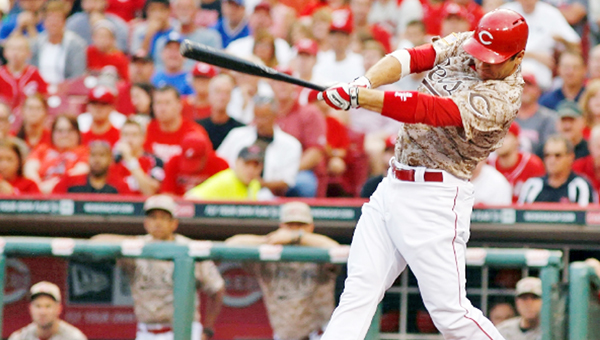 Cincinnati first baseman Joey Votto connects for a run-scoring double in the third inning Wednesday as the Reds beat the Los Angeles Dodgers 5-0. (Photo Courtesy of The Cincinnati Reds)

CINCINNATI (AP) — Johnny Cueto was striking out batters. Joey Votto and Jay Bruce were driving in runs. For one night, the Cincinnati Reds felt like themselves.

It hasn’t happened that often this season.

Cueto matched his career high with 12 strikeouts in six innings, and Votto and Bruce — the missing core of Cincinnati’s batting order much of the season — each drove in runs Wednesday night, leading the Reds to a 5-0 victory over the Los Angeles Dodgers.

Cueto (6-5) followed his shortest start of the season with one of his most dominating. He gave up three singles and didn’t walk a batter, leaving after his 112th pitch. Cueto lasted only five innings during an 8-0 loss to Philadelphia on Friday.

The Dodgers fouled off a lot of pitches, quickly elevating Cueto’s pitch count. He lobbied for one more inning but manager Bryan Price decided he’d had enough.

“That’s the way it was,” Cueto said, with trainer Tomas Vera translating. “I wasn’t trying to strike everybody out, but they made me throw a lot of pitches.”

Jonathan Broxton escaped a bases-loaded, one-out threat in the seventh by getting Hanley Ramirez to ground into a double play.

“All we’re trying to do down there is get the outs in the sixth, seventh and eighth innings and let (closer Aroldis Chapman) have the spotlight,” Broxton said. “That’s been working most of the year.”

Votto doubled home a pair of runs off Hyun-Jin Ryu (7-3), who had won his last four starts. Votto hadn’t driven in a run since May 10, missing 23 games in between because of a strained muscle above his left knee.

The Reds are hoping that with Votto and Bruce back in the lineup, they can get a lot more out of an offense that ranks second to last in the majors in runs scored.

“We have a history here,” Price said. “We have a real good understanding that we have players who have accomplished things at a high level here. You saw some of that tonight. Hopefully, it’ll be a precursor to good things.”

The loss snapped the Dodgers’ three-game winning streak, which matched their season high. They’re 4-2 on a trip that concludes Thursday and 22-13 overall on the road.

Dodgers left fielder Matt Kemp was ejected in the second inning by plate umpire Seth Buckminster, a minor league umpire brought up to the majors. Kemp was called out on strikes and continued to argue from the dugout. It was Kemp’s eighth career ejection and his second this season.

Kemp was ejected by Angel Hernandez on April 26 for arguing a called third strike.

Cueto faced the minimum 15 batters through five innings — Dee Gordon singled but was picked off. He also fanned 10 over that span, including five in a row while getting up to 90 pitches. The Dodgers got a pair of singles in the sixth, but Ryu failed to get down a bunt to advance them.

Ryu had won his first five decisions on the road this season. When he faced the Reds on May 26 at Dodger Stadium, he took a perfect game into the eighth before settling for a 4-3 victory.

He helped the Reds get ahead in the rematch. Ryu walked two batters ahead of Votto’s two-out double in the second. Votto scored on Brandon Phillips’ single. Bruce homered in the sixth for a 4-0 lead.

NOTES: Zack Greinke (8-2) faces Alfredo Simon (8-3) in the final game of the series on Thursday afternoon. The Reds are 4-5 on their homestand. … Ramirez was a late scratch because of a sore shoulder but pinch hit in the seventh and hit into the double play. … RHP Chad Billingsley, who had reconstructive elbow surgery last year, didn’t feel right while throwing in the bullpen on Tuesday and has put his rehab on hold until the elbow can be examined. … RF Yasiel Puig visited the Cincinnati Zoo and tweeted photos and video of himself with elephants, polar bears and a snake. … The Reds wore camouflage jerseys and hats honoring the military. … SS Zack Cozart has a six-game hitting streak.

Jim Walker jim.walker@irontontribune.com   What happens when you combined Ohio State football and basketball? You get a benefit basketball game.... read more