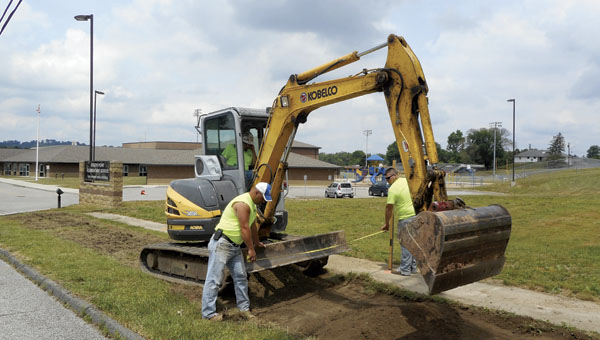 The Ohio Department of Transportation got started on a summer long project on Monday that will provide one South Point neighborhood with new sidewalks.

The construction of the sidewalks is part of ODOT’s Safe Routes to School program aimed at providing safe walking and bicycling paths for children to travel to and from school. The sidewalks are being built along Park, High, Seventh and Washington streets, which together form the perimeter of South Point Elementary.

“In order to encourage walking and biking to school, there needs to be safe and viable options for children,” Vaughn Wilson, ODOT District 9 deputy director, said. “Projects such as this one help our communities provide these options.”

The sidewalk project is set to be completed sometime toward the end of the summer and isn’t expected to have an impact on traffic. South Point Schools Superintendent Mark Christian hopes that the project is just the first of many in the community.

“It’s a good thing because the kids will have a safe sidewalk to walk to school on,” Christian said. “We’re hoping next year to start a project that will build sidewalks to the library from the school. That would allow us to take some field trips to the library with the students.”

BUDS, INC. out of Nashport, was awarded the contract for the project for approximately $133,571.

If the county turns part of the now closed Franklin Furnace juvenile correctional facility into its new jail, it will... read more