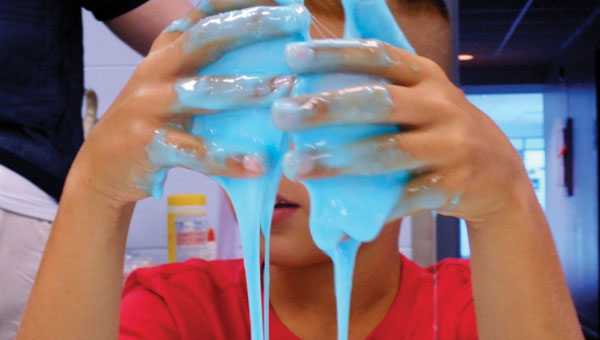 Students play with slime at the tweens program at Briggs Lawrence County Public Library in Ironton.

On Monday afternoon as part of the library’s tween mad scientist activity program, children at the Ironton branch learned how to make “slime.” The sticky, gooey substance was made with liquid starch and glue.

“The first thing we did was we got some glue and poured it in a bowl,” 10-year old Hunter Blagg, said. “Then we put some liquid starch in the bowl and mixed it together and that made the slime. Then we put some dye in it to make it a cool color.”

Paige Bailey, 11, said making the slime was fun and taught her a couple of things.

“I learned how mixing things together can make something else,” Bailey said. “I also learned how to properly wash my hands. When the slime gets all stretched out, it kind of feels like spiderwebs.”

Next week Briggs’ mad scientist program will be at 4 p.m. at the South Point location.

Rescuer tries to save orphaned fawn