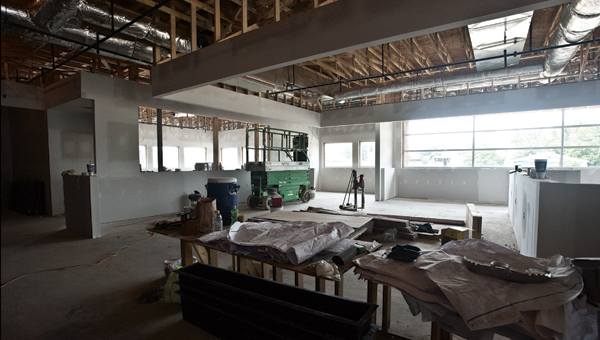 THE TRIBUNE/JESSICA ST. JAMES – The inside of the unfinished Big Boy that will opening on Aug. 11.

After usual construction setbacks and weather delays, the date for Frisch’s Big Boy — part of Phase I of the Gateway Project on Ninth Street in Ironton — will have its grand opening on Aug. 11.

Jim Kratzenburg, Ironton businessman and investor in the Gateway Project, confirmed the date on Thursday and said the same construction delays have pushed back the opening of the Holiday Inn Express and Suites, the other facet of Phase I, to Oct. 1.

“Every day we’re getting closer to opening,” Kratzenburg said. “We got a little bit behind because of the winter weather, but weather delays are expected for most construction projects.”

Originally the target goal for opening Frisch’s Big Boy was early June and the hotel was this summer.

Kratzenburg said the winter of 2014 was the worst in the past seven years to start a construction project. This past April Kratzenburg told The Tribune the hotel was about two weeks behind, but said with the weather’s turn for the better that span could be made up quickly.

“With good weather we can make up the lost time,” he said. “It will still open by the first of October unless something drastic pushes it back.”

The 5,500-square-foot 172-seat Frisch’s Big Boy is modeled after the company’s largest schematic and will feature a conference room equipped with Internet and electronics to use for presentations.

“It’s the biggest restaurant the company offers,” Kratzenburg said. “It will be the type of room the Rotary and other clubs like that can use. “It is free to use as long as the people using it are ordering food.”

John Mullins Construction, of Wheelersburg, is in charge of site work and construction of the Big Boy.

The Holiday Inn is being built by MPH Hotels of St. Petersburg, Fla. MPH has constructed more than 150 hotels in the United States.

The Ohio Department of Administrative Services allocated $500,000 toward the $11 million project and a state Appalachian grant of $150,000 was awarded.

SWAT will benefit from government program

This week, the Lawrence County Sheriff’s Office added a new vehicle to its fleet — a 2010 up-armored Humvee. The... read more