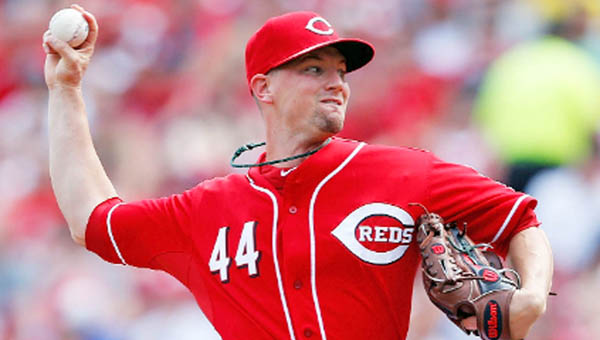 Cincinnati’s Mike Leake pitched eight strong innings Saturday as the Reds routed the Toronto Blue Jays 11-1. It was Leake’s fifth win of the season. (Courtesy of The Cincinnati Reds.com)

CINCINNATI (AP) — Mike Leake wasn’t about to let this 8-0 lead get away.

Jay Bruce’s homer helped the Reds get ahead by eight runs for the second day in a row, and Leake made this big lead stand up, pitching eight innings on Saturday for an 11-1 victory over the Toronto Blue Jays.

A day earlier, the Blue Jays pulled off the second-biggest comeback in their history. Down 8-0 after the second inning, they rallied to a 14-9 victory behind a pair of homers from Edwin Encarnacion.

With their bullpen depleted, the Reds needed a solid effort from Leake (5-6), who went eight innings for the first time since May 13.

“I already knew that we needed something, but it’s not like you can do it on command,” Leake said. “My focus today was getting strike out within the first two pitches and going after them.”

The Reds got ahead 8-0 after four innings on Saturday against J.A. Happ (6-4), and the Blue Jays didn’t have another big comeback in them. Leake had a lot to do with it, allowing the Blue Jays only four hits, including Colby Rasmus’ homer.

“That was a character game,” manager Bryan Price said. “We needed to show up and get yesterday out of our minds. One thing this team has shown all year is that it doesn’t get down on itself.”

The Blue Jays are 9-5 all-time against the Reds, having won their four previous interleague series.

Cincinnati’s offense has languished near the bottom of the majors for much of the season, with Bruce and Joey Votto spending time on the disabled list. Both are back, and the Reds are starting to hit. They’ve scored at least nine runs in four of their last six games.

Devin Mesoraco added a three-run homer in the seventh, his third homer in three games, as the Reds pulled away and quickly forgot about their Friday night meltdown.

“Dusty (Baker) always said, ‘Momentum is only as good as the next day’s starting pitcher,”’ Mesoraco said. “Leake went out and gave us what we needed, and we were able to put some runs on the board.”

Happ made it easy for the Reds in the first inning, walking three batters with two outs. Ryan Ludwick drove in two runs with a single, and another scored on Erik Krantz’s passed ball.

Bruce’s homer in the third inning gave him 47 homers off left-handers over the last five seasons, the most by any player in the majors. Bruce scored three times overall.

The Reds made it 8-0 in a fourth inning highlighted by RBI doubles from Votto and Brandon Phillips. Leake singled and scored during the rally.

Happ lasted only four innings and give up seven hits, eight runs and four walks. It was his shortest start of the season. The four walks matched his season high. It was the most runs he’d allowed since July 13, 2012 against the Giants.

“He didn’t have it today,” manager John Gibbons said. “We never really had a chance. It was another big deficit to overcome. It was a little disappointing after last night, but there’s nothing we can do about it now.”

Billy Hamilton singled home a run, extending his hitting streak to a career-high 10 games. He also stole his 31st base, the most by a Reds rookie since Chris Sabo stole 46 in 1988.

After their four-homer, 16-hit splurge in the series opener, the Blue Jays went back into their hitting funk. The AL East leaders have lost 10 of their last 14 games, scoring two runs or less seven times during that span.

NOTES: Johnny Cueto, who leads the NL with a 1.92 ERA, goes in the final game of the series against R.A. Dickey, who got two extra days of rest after his last start because of a sore groin. … Both teams bolstered their bullpens before the game. The Blue Jays called up LHP Rob Rasmussen and optioned RHP Liam Hendriks. The Reds called up RHP Carlos Contreras and designed OF Roger Bernadina for assignment. Both got into the game. … SS Jose Reyes fouled a pitch off the side of his left knee in the fifth inning but stayed in the game and popped out. He was replaced as part of a double switch in the bottom of the inning. … The Reds had their fourth sellout of the season. They’re 1-3 in front of sellout crowds at Great American Ball Park this season.