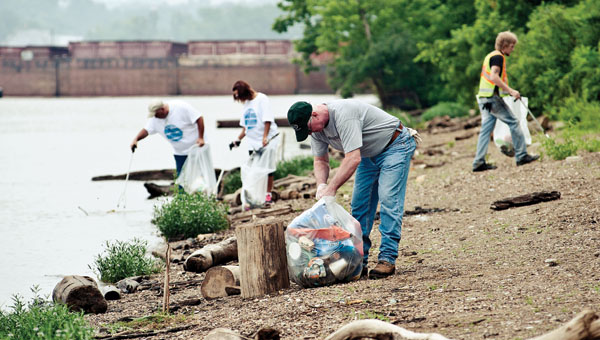 For the 25th straight year more than 3,000 miles of Ohio River shoreline were cleaned on Saturday.

The cleaning is made possible through a partnership between Orsanco, a Cincinnati-based company, and various volunteers from cities, towns and counties stretching from Pittsburgh, Pa., to Cario, Ill. The Lawrence-Scioto Solid Waste Management District spearheaded cleaning the Lawrence County portion of the river.

“Numbers were a little bit down this year in terms of volunteers,” Stephanie Helms, community outreach coordinator, said. “But, we were still able to accomplish what we wanted to accomplish and were able to get the banks cleaned up.”

“Our four locations were Symmes Creek near Chesapeake, the Coal Grove boat ramp, and the riverfronts in South Point and Ironton,” Helms said. “7 Up and the Food Fair in South Point donated bottled water and doughnuts for all our volunteers and Walmart made a monetary donation that helped us pay for things like first aid.”

Volunteers from throughout Lawrence County also played an important role. Helms said several of the volunteers are regulars and show up to help every year.

“Even though I said our numbers were down a little this year we still had some of our regulars out,” she said. “Like Gary Vernatter. He was at the South Point location where I was and I see him helping every single year.”

T-Shirts, bags and gloves were also supplied to each volunteer by Orsanco. The Ohio River Sweep cleanup occurs every year on the third Saturday in June.