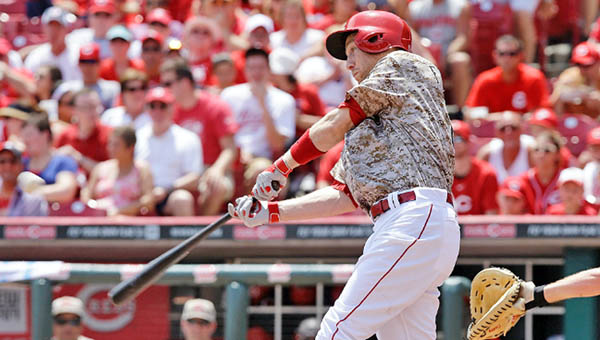 Cincinnati third baseman Todd Frazier connects for a two-run homer in the fifth inning that helped give the Reds a 4-3 win over the Toronto Blue Jays on Sunday. It was Frazier’s 17th home run of the season. (Courtesy of The Cincinnati Reds.com)

CINCINNATI (AP) — Two days before his 52nd birthday, Reds manager Bryan Price asked for two long outings from his starting pitchers to save an overworked bullpen.

The Reds surrendered an 8-0 lead on Friday night and spent its bullpen in the process. Behind Cueto, the Reds won after Blue Jays stars Brett Lawrie and Jose Bautista exited early because of injuries.

Leake pitched eight innings in an 11-1 win on Saturday. The victory allowed the Reds to win their fifth straight series and even their record at 37-37. They have not been above .500 this season.

“I’m very proud of this team. They battled through a lot of adversity,” said Price on his birthday. “Someone is taking care of me. Maybe it’s my mom sending good vibes.”

Cueto led off the fifth with a bunt single. One out later, Frazier lined his team-leading 17th homer of the season.

Frazier went into the game tied with Pittsburgh’s Andrew McCutchen and Baltimore’s Adam Jones for the most home runs in the month of June. Each had seven.

Frazier hit his second home run off Dickey. He faced the knuckleball pitcher in 2012 as a member of the Mets.

“The knuckleball is pretty hard to hit,” Frazier said. “It was crazy. It was a 2-0 count. I didn’t think I hit it enough to go out. The last one I hit off him was off the boat.”

The boat is a replica riverboat high above the batter’s eye in straight away center field over 450 feet from home plate.

Cueto (7-5) gave up three runs — one earned — and leads the NL with a 1.86 ERA. He gave up seven hits and struck out eight while winning his third straight start.

Cueto limped around the bases on Frazier’s home run with a cramp in his hamstring but was able to work through it for the last three frames.

“When Frazier hit the ball, I went back to tag and I felt it,” Cueto said through a translator. “It was just a cramp. I felt better than I did last game. I was able to keep the ball down and stay aggressive.”

Lawrie sustained a broken right index finger when he was hit by a pitch in the second. The team didn’t immediately announce how long the infielder would be out.

Bautista left because of tightness in his left leg. The All-Star outfielder had a single and a sacrifice bunt before leaving.

Aroldis Chapman struck out the side in the ninth for his 13th save. Chapman was charged with the loss on Friday.

Edwin Encarnacion led off the Toronto eighth with his 24th home run, connecting against his former team.

The Reds used Encarnacion’s error at first to take a 1-0 lead in the first. With Frazier on first and two outs, Brandon Phillips was safe when Encarnacion couldn’t handle third baseman Juan Francisco’s throw on a chopper. Jay Bruce converted the error with an RBI single.

The Blue Jays got help from two errors to take a 2-1 lead in the third. Munenori Kawasaki reached on first baseman Joey Votto’s throwing error, Melky Cabrera singled and Toronto loaded the bases on Cueto’s misplay of Bautista’s bunt. One out later, Colby Rasmus lined a two-run single.

Encarnacion, who a pair of three-run homers Friday night, homered off Cueto into the left-field seats.

NOTES: Phillips left in the middle of the fifth with a bruised right heel. “He hit his head with a follow through,” Price said. “He wanted to stay in but I thought it best to take him out when I saw him in the field.” … The Reds open their second 10-game road trip of the season with the first of three games against the Cubs.