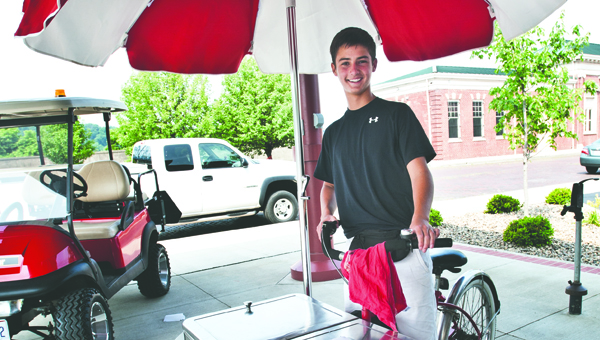 THE TRIBUNE/JESSICA ST JAMES
Young entrepreneur Mason Slagel stands next to his cart at the Farmers Market in Ironton. Slagel put together his traveling cart of ice cream and pop to make extra money this summer.

Mason Slagel backed his cherry red bike out of the vestibule of the Ironton City Center. Monday was the first day for him to hit the downtown businesses with his new venture — the Cool Spot Ice Cream Tricycle.

He had gotten three orders from the city center and a request for a menu. Now it was down to Scherer-Mountain Insurance Co. on the next block.

Inside he started his spiel.

“Hi. I’m Mason Slagel and I’m starting an ice cream tricycle business. I was wondering if you would like anything.”

Eyes perked up at the prospect of ice cream on a day where the temperature had hit 92.

“What is the most chocolatish you’ve got,” one of the women in the office asked.

That would be the chocolate fudge and out Mason went to his cooler to fill three more orders.

Outside a woman from a business across the street called out.

“What is he selling?”

When she found out it was ice cream, her response was quick.

“Send him over here.”

And that’s how Day 3 went for the 15-year-old fledgling entrepreneur, who plans to spend his summer vacation learning what works and doesn’t work in business.

Mason got the idea when he and his parents were in Lexington, Ky., about six months ago and saw vendors biking on the streets around Rupp Arena hawking all kinds of merchandise.

“I thought it was a thing to do in Ironton and a way to make cash,” he said.

That was the start of the Cool Spot Ice Cream Tricycle with its cooler stocked with ice cream drumsticks, ice cream sandwiches, Klondike specialty bars, cookie sandwiches, pop and water.

He bikes his inventory around in a specially made tricycle made up of two identical bikes that a welder from his father’s business, Modular Security Systems Inc., put together.

“He took the front for a cooler and put the front wheels of the bike on the side,” Mason said.

Mason candidly credits his father, Rob Slagel, as a great influence as he tests the business waters.

“He is a great influence,” Mason said. “He has helped me a lot with the ice cream cart, more than I can say. He has done so much for getting me on my feet.”

Mason started the Cool Spot Ice Cream Tricycle last week with a two-day route at the Friday and Saturday Farmers Market before dedicating Monday to the downtown businesses.

Already he’s discovered keeping inventory in tip-top condition can be a bit of a struggle.

“Some of the ice cream will get smashed, if you are not careful,” he said. “Luckily I got that fixed. I got some ice packs to keep it cool and that doesn’t happen any more.”

Besides cash, Mason sees this summer’s venture as a way to gain some vital intangibles.

“I’d like to get some real world experience managing a business and controlling inventory,” he said. “And I am promoting downtown Ironton by offering ice cream. It brings people into Ironton for a thing like this.”

Those are long-term goals, but Mason has already found another intangible that brings him great satisfaction in the short run.

“I do like selling to children and seeing their faces when they get good ice cream,” he said.

CHESAPEAKE — Organizers of a proposed community garden at the Chesapeake Community Center are looking for sponsors for the garden... read more