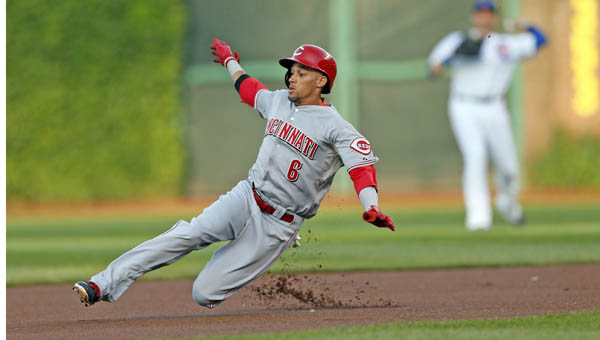 Cincinnati Reds’ Billy Hamilton doubles to lead off the 1st inning against the Chicago Cubs’ Jeff Samardzija at Wrigley Field in Chicago on Monday. Devin Mesoraco hit a grand slam in the ninth inning as the Reds won 6-1. (MCT Direct Photo)

CHICAGO (AP) — Devin Mesoraco was hit by a pitch twice, in addition to the usual nicks that go along with being a catcher. He had a bag of ice on his right wrist and another on his left knee when he sat down for a well-deserved postgame meal.

One sweet swing and another big win, and it was easy to forget about one painful night.

Mesoraco homered for the fourth straight game, connecting for a two-out grand slam in Cincinnati’s five-run ninth, and the Reds beat the Chicago Cubs 6-1 on Monday for their third straight win.

“You’re going to get beat up back there,” said Mesoraco, shrugging off all the bumps and bruises. “That’s why I get more days off than everybody else.”

Mesoraco drove a 1-0 pitch from Hector Rondon (1-2) into the basket in left-center for his 13th homer. It was his second grand slam of the season and No. 3 of his career.

Billy Hamilton had a tiebreaking RBI single earlier in the inning as Cincinnati won for the sixth time in seven games to move above .500 for the first time this season at 38-37. The winning sequence started when Chris Heisey reached on a pinch-hit single with two outs and no one on base, snapping an 0-for-16 rut.

“It was all set up by Chris Heisey fighting his way into that soft single and stealing second base,” Reds manager Bryan Price said.

It was the first homer allowed by Rondon since Aug. 1.

“Not the way you kind of draw it out. We tried to let him work his way through it,” Cubs manager Rick Renteria said. “Obviously it didn’t work out.”

Jonathan Broxton (3-0) pitched a perfect eighth and Logan Ondrusek got three outs, helping the Reds improve to 30-11 against the Cubs over the last three seasons.

Anthony Rizzo hit his 16th homer for the Cubs, who have lost three in a row. Jeff Samardzija struck out seven while pitching six innings of one-run ball.

“All in all, I felt good, just needed a little improvement there early,” Samardzija said.

The Reds got off to a fast start behind Hamilton, who led off the game with a grounder just past second baseman Darwin Barney. The bouncer died in the grass in short right field and the speedy rookie hustled into second with a double, extending his hitting streak to 11 games.

Todd Frazier followed with a drive into the gap in right-center for an RBI triple. But Samardzija buckled down and kept Frazier at third, retiring Jay Bruce and Ryan Ludwick after he hit Mesoraco for the first time with one down.

Chicago wasted a prime scoring chance in the fourth. Rizzo reached on a leadoff single before Starlin Castro doubled into the left field corner, putting runners on second and third.

Alfredo Simon then retired three straight to preserve Cincinnati’s 1-0 lead. Luis Valbuena flied out to medium right field, Welington Castillo hit a comebacker to the mound and Ryan Sweeney lined out to left.

“I just tried to make my pitches the best I can, and everything was good,” Simon said.

The Cubs also wasted a leadoff double by Barney in the third. Samardzija broke his bat over his left knee after he popped up a sacrifice attempt.

Simon allowed one run and five hits in seven innings. He struck out five and walked one.

Frazier finished with three hits and Mesoraco reached five times. He also walked twice before he connected in the ninth.

“I felt good the first time that I was here. I felt good coming into this series,” Mesoraco said. “You just try to ride them out as long as you can.”

NOTES: Reds 2B Brandon Phillips (bruised right heel) got the night off. Price said Phillips is day to day. … Renteria said they are working on finalizing the starting pitchers for Saturday’s doubleheader against Washington. … Cubs RHP Jake Arrieta (3-1, 1.98 ERA) will face RHP Homer Bailey (7-3, 4.68 ERA) in the second game of the three-game series Tuesday night. Arrieta is 2-0 with a sparkling 0.73 ERA in four starts this month. … Sting led the crowd in the singing of “Take Me Out To The Ball Game” during the seventh-inning stretch.