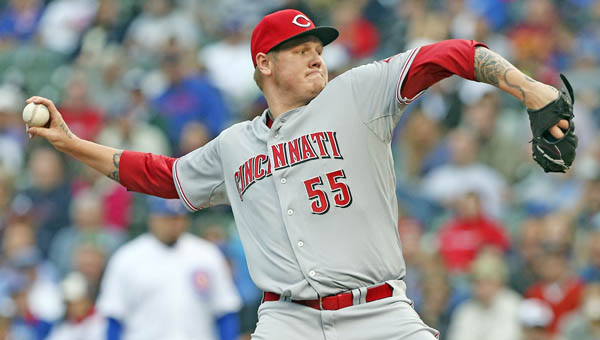 Cincinnati’s Mat Latos pitched seven strong innings and got his first win of the season as the Reds beat the Chicago Cubs 4-1 Wednesday. (MCT Direct Photo)

CHICAGO (AP) — While Mat Latos is building up his arm strength after beginning the year on the disabled list, his command was near perfect on Wednesday.

Latos pitched seven sharp innings for his first win of the season and Jay Bruce had two run-scoring doubles, leading the Cincinnati Reds to a 4-1 victory over the Chicago Cubs.

With the wind blowing in on a cold summer night, Devin Mesoraco’s five-game homer streak came to an end. The Reds catcher was tied with Adam Dunn, Ken Griffey Jr., Johnny Bench, George Crowe and Ted Kluszewski for the franchise record.

Latos (1-0) allowed one run and five hits in his third start after right elbow and left knee surgeries kept him out to open the season. His fastball was clocked in the low 90s.

“Midseason form, I am a ways off from that,” he said. “I’m healthy, that’s the main key. I know what I need to do. My stuff is good enough.”

Latos struck out five and walked none in his first win since Sept. 2 against St. Louis. The right-hander also improved to 4-0 with a 2.73 ERA in five career starts at Wrigley Field.

“I was telling somebody it is almost like getting somebody in a trade, not having him all year and have him come back and pitch well so far since he’s been back,” Bruce said. “It’s something we definitely welcome and look forward to as a team.”

Latos was coming off a frustrating no-decision against Toronto, when he was staked to an 8-0 lead and was unable to hold on. He gave up five runs and nine hits in 5 2-3 innings as the Blue Jays rallied for a 14-9 victory Friday night.

“He is nowhere near his max velocity,” manager Bryan Price said. “We know he is a guy that is able to reach 96, 97, in the years past, but I think it is part of the process in building up arm strength after the surgery.”

Edwin Jackson (5-8) allowed four runs and six hits in 5 1-3 innings for Chicago, which has dropped four of five. Starlin Castro had two hits and drove in a run.

“It’s a tough lineup. They’re going to make you work,” Jackson said. “I thought for the most part I was able to contain them until the sixth inning. They kind of busted it open a little bit.”

The Cubs lost two of three against the Reds to fall to 12-31 against Cincinnati over the last three seasons.

Jonathan Broxton pitched a perfect eighth and Aroldis Chapman finished for his 14th save in 15 chances.

Pinch-hitter Justin Ruggiano doubled off the front of the basket in right field with two outs in the ninth. The call was upheld after manager Rick Renteria called for a review, and Chapman struck out pinch-hitter Mike Olt to end the game.

Cincinnati went ahead to stay with three runs in the sixth. Todd Frazier scored from first on Joey Votto’s opposite-field double to left. After Mesoraco’s single, Bruce lined a double off third baseman Luis Valbuena’s glove to drive in Votto.

Jackson struck out Chris Heisey before James Russell came in, and Skip Schumaker executed a perfect suicide squeeze to give the Reds a 4-1 lead.

“It was the first one in my life. College, big leagues, you name it,” said Schumaker, who also had two doubles in the game. “I saw the sign. It worked out.”

Bruce put the Reds in front with a two-out double down the right-field line in the first, scoring Frazier from second. Votto tried to hustle home from first but was cut down at the plate on Darwin Barney’s relay throw.

The Cubs tied it in the fourth. Ryan Sweeney reached on a leadoff double, advanced on Anthony Rizzo’s groundout and scored on Castro’s base hit.

NOTES: Reds 2B Brandon Phillips was out of the lineup for the third straight game with a bruised right heel. … RHP Dallas Beeler will make his major league debut in Game 1 of Chicago’s day-night doubleheader Saturday against Washington. The 25-year-old Beeler is 5-3 with Triple-A Iowa. … Mesoraco was picked off first base after originally called safe by umpire Trip Gibson in the fourth inning. The call was overturned by replay review.