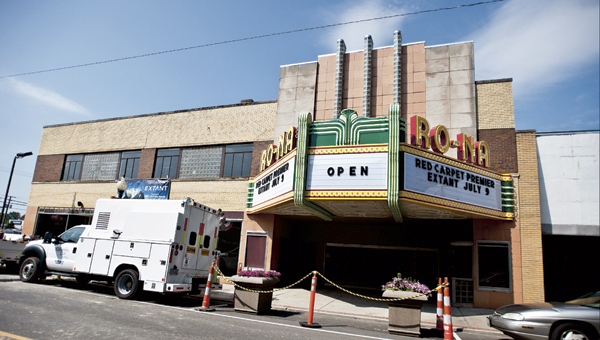 Third Street in downtown Ironton was closed temporarily on Monday while employees from Columbia Gas installed a gas line for the Ro-Na Theater.

“The gas here had been cut off so long we just hooked it up,” Jane Griffith, Friends of Ironton board member and secretary, said. “It’s something else we can check-off our list of things that need to be done.”

Grassroots organization Friends of Ironton began the push to renovate the Ro-Na in 2009. The theater opened in 1949 and closed in 1973. With a current projected renovation budget of $4.5 million — one-third of which will come from historic tax credits — the source for the remainder of the budget is to be determined.

“We have installed sprinkler systems and fire alarms,” Griffith said. “Renovation of the restrooms is completed. Our next step is to work on the lobby.”

A new marquee was installed among much fanfare recently and the venue’s Tuesday night concert series began this week. The concert is 6-8 p.m. every Tuesday and there is no charge for admission.

“We sell concessions at the concerts,” Jeff Mowery, FOI board member, said. “Toward the end of the year last year the crowd for the concerts started to grow and we hope that continues.”

FOI board members along with Griffith and Mowery are Val Freeman, Madolin Blackwell, Dean Nance, Rick Jansen and Jessica Williams.

For more information and an events schedule, visit www.ro-natheater.com.

The two winners in last month’s primary race for Lawrence County Commission outspent their opponents as they sought their party’s... read more