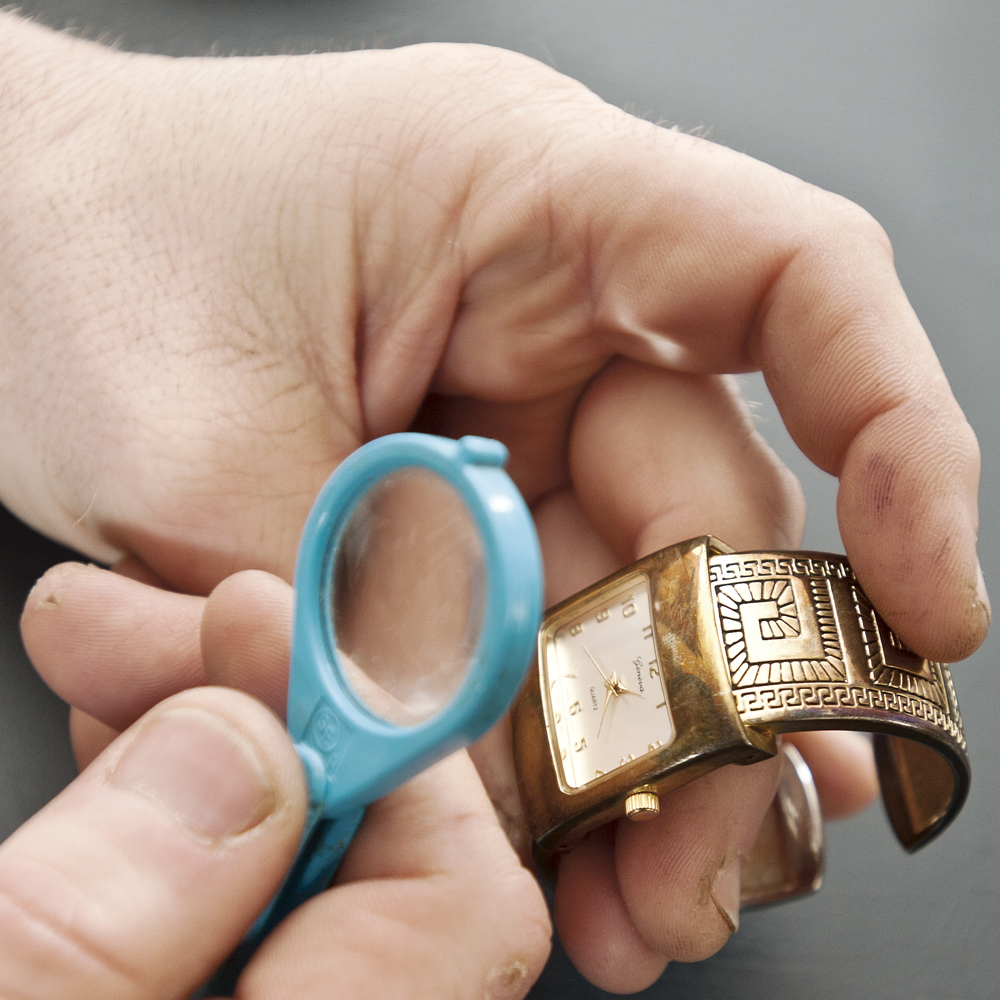 Helen Saunders unwrapped the oval watercolors and waited expectantly to learn what they were worth.

She bought them for a whim at a garage sale and paid $1.

Now Scott Cron was sizing them up with his jeweler’s loupe.

Saunders was the first in a line of collectors and yard sale aficionados who had come to the Lawrence County Museum on Saturday to have Cron give his professional opinion on their finds. Currently Cron has an antique mall at 404 S. Fourth St., called Ann’s Antiques and Collectibles.

The next picture Saunders showed him was a print depicting a Renaissance type of outdoor scene.

“There is no name on it but there is nothing wrong with that,” Cron said.

On the back was a mirror, whose condition was one of the ways Cron was able to date the print.

“It’s from the way the mirror is cloudy and looks aging,” he said.

“If you would find an old mirror like this and it was perfect, then you’d have something,” Cron said.

But another $1 investment paid dividends for Saunders when Cron appraised the picture at $40.

Next up was Connie Booth who had a watch bracelet she bought at Goodwill for $4.25. Although it looked old, when Cron spotted the word, “quartz,” he knew it was no older than the 1970s.

Older, more valuable watches were made with jewel bearings in their mechanism. More recently those were made out of a synthetic form of a ruby. Originally actual jewels, such as diamonds, rubies or garnets, were used until the early 1900s when synthetic forms were invented.

“They put in quartz when they wanted to do it cheaper,” he said. “To put jewels in a watch ,that cost money.”

A watch with a 21-jewel mechanism could be worth between $400 and $500, according to Cron. Often watches are scrapped for their metal, however, especially if it is gold.

“I hate to see something that is nice and delicate and is scrapped for gold,” Cron said.

Cathy Artis had one of the largest items, a massive silver coffee pot suspended inside a silver frame. It has been in her family for generations and she remembered it sitting on the hearth in her parents’ home. She is the latest family member to have the piece.

“It is in great shape,” Cron said.

He was unable to find a hallmark to identify the silversmith or if it was sterling. Because of that, he appraised it at $150.

The highest priced item brought to the appraisal was a 18th century family Bible a woman had purchased in New Jersey.

“You have hit a home run,” he said. “The condition it is in. I’ve never owned one this old.”

Party in the Park Saturday

SOUTH POINT — The Fourth of July weekend is a big weekend in American communities in each of the 50... read more