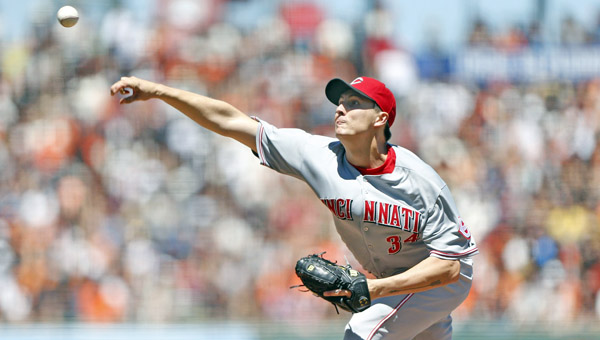 SAN FRANCISCO (AP) — Homer Bailey heard frequent reminders that he had a no-hit bid in progress. Not anyone on the Cincinnati bench mentioned it, however.

“I wasn’t really thinking about it, other than the fan just above our dugout who kept yelling at me about it,” Bailey said. “That was nice of him.”

Bailey made a strong bid for yet another no-hitter, shutting down San Francisco until Buster Posey’s two-out single in the seventh inning and pitching the Reds past the Giants 4-0 Sunday.

Bailey has thrown no-hitters in each of the last two seasons, and did it against the Giants at home last July 2. He came close to pitching the latest gem at AT&T Park — the ballpark was the scene of Tim Lincecum’s no-hitter Wednesday against San Diego.

“I had pretty good stuff, got a lot of early outs and we scored enough runs,” Bailey said. “It was our lucky day, I guess.”

Bailey (8-4) finished with a three-hitter as the Reds completed their first four-game sweep in San Francisco since 1972 at Candlestick Park.

The Giants were swept in a four-game series for the first time in their ballpark that opened in 2000. San Francisco has lost 15 of 19 while watching its 9 1/2-game lead dwindle in the NL West, and dropped into a virtual tie with the Los Angeles Dodgers.

“We got them at the right time,” Schumaker said. “It’s still a playoff team, in my opinion. They are too good of a team. I’m just happy to get out of here while they were struggling a little bit.”

Bailey walked one and struck out seven in his fourth career shutout and sixth complete game.

Bailey walked Gregor Blanco leading off the fourth, but later caught him taking off early for third base and threw him out.

That was all the Giants got into Posey singled cleanly to right-center field. Pablo Sandoval’s bloop single moved Posey to third, but Bailey struck out Michael Morse looking to end the inning.

“We ran into four starters as dominant as four starters I’ve ever seen before,” Giants’ manager Bruce Bochy said. “They caught everything we hit. They are as hot as any team, and as cold as we are, it’s what we have to deal with.”

Bailey was trying to become just the sixth pitcher with at least three career no-hitters. Nolan Ryan leads that list with seven.

“He pitched efficiently and we played great defense,” Reds manager Bryan Price said. “When the outs are coming so early in the count, he has a chance.”

Tim Hudson (7-5) allowed two runs on five hits. He did not walk a batter and struck out six. He’s lost his last two starts at home after opening the season with seven straight wins.

“My delivery felt a lot better and my timing was good,” Hudson said. “They had one or two opportunities to score and they took advantage. I felt like I made a pretty good pitch on Hamilton. Every little run counts in a game like this.”

Hamilton’s two-out double in the third drove in the Reds’ first run, and with the way Hudson was pitching — he retired 12 of 13 following the double — Bailey needed to be nearly perfect.

The Reds tacked on three runs in the ninth against Jeremy Affledt, who took over for Hudson after Todd Frazier started the frame with a single.

Affledt balked, hit a batter, threw a wild pitch, allowed three hits and an inherited runner to score and got his only out on Phillips’ sacrifice fly.

NOTES: Bochy announced before the game he would be going with a closer-by-committee for the time being, with RHP Sergio Romo in the mix. “I think it’s time to tweak it a little bit, get guys on track,” Bochy said. … Giants 1B Brandon Belt (thumb) could rejoin the team Friday in San Diego, but not likely before then. … Lincecum (6-5, 4.42) makes his first start since throwing his second career no-hitter. He’ll face the Cardinals and Marco Gonzales (0-0, 9.00) on Tuesday night. … Mat Latos (1-0, 2.89) will start Monday night’s game in San Diego for the Reds. … The Reds have won their last five series and are 6-0-1 in their past seven. … Hamilton’s 16th double gives him the lead among NL rookies, breaking a tie with Arizona’s Chris Owings, who is on the DL. … The other pitchers with three or more no-hitters: Sandy Koufax with four and Cy Young, Bob Feller and 1880s pitcher Larry Corcoran with three.