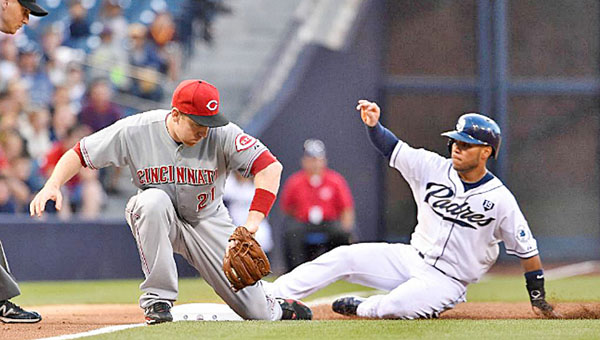 Cincinnati third baseman Todd Frazier can’t get the tag in time for the out on San Diego’s Alexi Amarista (right) as he slides safely into the base during a play in the second inning. San Diego beat the Reds 8-2 on Tuesday. (Courtesy of The Cincinnati Reds.com)

SAN DIEGO (AP) — The Reds’ Mike Leake was on a three-game winning streak and facing the punchless Padres on Tuesday night.

San Diego chased Leake with two outs in the sixth inning of an 8-2 victory as the Reds lost their second consecutive game after winning a season-best five straight.

Instead of Leake (6-7) recording his career-high fourth win in a row, he allowed three runs and 11 hits, four for extra bases. He didn’t walk anyone and struck out four.

Leake was rocked by an offense that had scored five runs in the previous five games and had one hit in Monday night’s victory.

“All in all, I’m not that disappointed,” Leake said. “They hit some good pitches. I made a couple of mistakes. Good job by them hitting me early in the counts.”

The Padres had won two straight, but on just three runs on five hits.

Leake was sharp in his previous two starts, allowing a run on four hits in eight innings in each of the outings. But the homecoming for the San Diego native was rocky as the Padres won their third straight game.

“They just found a way to put more balls in play and found more holes than is typical against Mike,” Reds manager Bryan Price said. “When we made a mistake they were able to find some grass in the outfield.”

Smith had three hits as the Padres finished with a season-high 16 one night after managing just one hit in a 1-0 win over the Reds.

Ian Kennedy (6-9) pitched six strong innings, giving up one run and seven hits with a walk and three strikeouts to get his first win in nearly a month. Kennedy, who improved to 4-1 in his career against the Reds, was 0-3 with a 6.08 ERA in his last four starts in June.

Quentin’s two-run homer in the four-run, seventh inning was the key blow when the Padres extended their lead to 7-1.

San Diego had its highest scoring total since an 11-1 win over the Cubs on May 23.

The Padres got the game’s final out when the original call was overturned through instant replay. Todd Frazier was ruled safe on a force play at second base before Black challenged the call.

It marked the second time since instant replay was instituted this season that a game ended with a call being reversed.

“The problem is replay is becoming a hot topic,” Price said. “We left the field angry several times and today’s another one. You’re castrated by the inability to talk to the umpires about the play.

“To walk off the field with your jaw on the ground, is not a way to leave the field. This is an 8-2 ballgame, maybe inconsequential, but that’s not the way to end the game, it just isn’t.”

Smith hit his ninth homer of the season leading off the first to give the Padres a 1-0 lead. It matched their hit total from the previous night and was San Diego’s first homer since Tommy Medica had one on June 24.

After totaling just five runs in their previous five games, the Padres extended the lead to 2-0 when Kennedy got San Diego’s third straight single.

The Reds pulled to 2-1 in the fifth inning when Frazier’s two-out, broken-bat single to center drove in Zack Cozart. That snapped the Padres’ scoreless innings streak at 21.

NOTES: Padres SS Everth Cabrera was a late scratch with a strained left hamstring. He’ll be re-evaluated Friday, but could be headed to the DL. … RHP Andrew Cashner (sore right shoulder) will resume throwing Wednesday after getting the OK from the team’s medical staff. … 2B Jedd Gyorko (plantar fasciitis) had his cast removed on Tuesday. … Reds 1B Joey Votto was lifted for pinch-runner on Tuesday, an indication his left knee remains tender. “He is not running at full speed,” Price said. … Reds RHP Johnny Cueto (8-5, 1.88) faces Padres RHP Tyson Ross (6-8, 3.18) in Wednesday afternoon’s series finale.