No shortage of fireworks’ displays across Tri-State 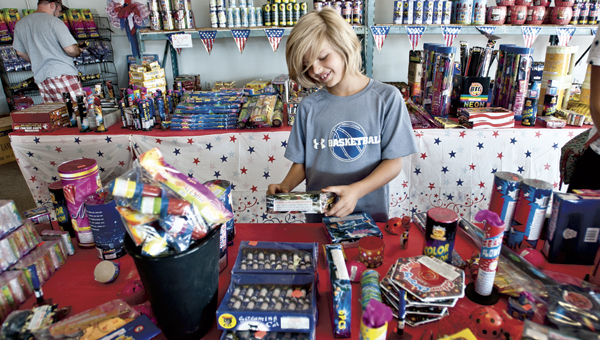 THE TRIBUNE/JESSICA ST JAMES
Nine-year-old Whyatt Mannon looks through a selection of fireworks at Red White and Kaboom, located to the left off the Ashland bridge going into Ashland, Wednesday evening.

See the skies light up this year with a variety of fireworks displays across the Tri-State.

In an effort to reduce the number of fires and fireworks-related injuries, the Division of State Fire Marshal encourages Ohioans to attend public fireworks displays hosted by local municipalities and licensed exhibitors this July 4 holiday.

“The best way for Ohioans to prevent fireworks injuries is to attend a licensed, professional fireworks exhibition,” Larry Flowers, State Fire Marshal said. “Keep in mind that even trick and novelty fireworks, like sparklers, are inherently dangerous and can cause serious injury.”

The only types of fireworks that can be legally purchased and discharged in Ohio are trick and novelty devices. These include items that smoke, sparkle, snap and snake. For those who choose to have their own display using these legal fireworks, Marshal Flowers encourages Ohioans to follow some important safety tips:

• Handle and discharge trick and novelty devices only under adult supervision.

• Appoint one adult to be in charge. This person should know the hazards of each type of firework being used.

• Carefully read and follow the label directions on the trick and novelty device packaging.

• Light only one sparkler at a time and hold it away from your body and others.

• Sparkler wires, which can burn up to 1800 degrees, should immediately be placed in a bucket of water to avoid injury as they remain hot for a few minutes after burnout.

• If someone gets burned, run cool water over the wound for two or three minutes and seek medical attention when necessary.

Other fireworks, like those sold at fireworks stores around Ohio, can be legally purchased in the state, but you must agree to take them out of Ohio to discharge within 48 hours.

“You must be at least 18 years of age to buy items such as firecrackers and bottle rockets at the stores you see along the roadways of Ohio,” said Flowers. “But firing them off within state boundaries is prohibited.”

There are stiff penalties for the illegal possession or discharge of fireworks. It is a first-degree misdemeanor for non-licensed individuals to discharge fireworks in Ohio, to falsify an application when purchasing fireworks, or to possess them for more than 48 hours without taking them out-of-state. First-time offenders are subject to up to a $1,000 fine and six months imprisonment.

What types of fireworks can be legally discharged in Ohio?

Trick and novelty fireworks include items such as sparklers, snaps, glow snakes and smoke bombs. In general, these can be sold in Ohio and used in the state. But check with your local community, which may have its own rules preventing these from being sold or used.

Firecrackers and sparklers cause the most injuries. Severe burns, injuries to the hands, eyes and face, and even blindness or hearing loss can happen anytime something is burned. For example, legal sparklers burn at up to 1800°, hot enough to melt gold. Severe burns happen every year. In addition, puncture-type injuries to an eye are common. The safest way to enjoy fireworks is to attend a show by a licensed exhibitor.

What types of fireworks are illegal to discharge in Ohio without a license and permit?

Display or exhibitor fireworks include aerial shells that are fired from mortars. They can only be sold by a licensed manufacturer, wholesaler, or, under limited circumstances, out-of-state shippers.

Commonly referred to as consumer fireworks, these include firecrackers, bottle rockets, roman candles and fountains. A license is needed to sell these, but anyone over the age of 18 may purchase these items, but must sign a form certifying they will take the fireworks outside the state of Ohio within 48 hours. It’s illegal to set them off in Ohio.

What is a purchaser form?

If you buy fireworks in Ohio, you have to sign a purchaser form certifying you will take the fireworks out of state within 48 hours.

Purchasers are responsible for illegal use of the fireworks, including any damages. Making a false statement on the form is a first-degree misdemeanor. The purchaser’s copy of the form must accompany the fireworks, be attached to an invoice itemizing the quantity of fireworks purchased, the amount of the sale, and made available upon request by a law enforcement officer or fire authority.

How many injuries result from

The U.S. Consumer Product Safety Commission (CPSC) reports fireworks were involved in an estimated 11,400 injuries treated in U.S. hospital emergency departments during calendar year 2013. Children under the age of 15 accounted for 40 percent of the injuries.

How does the State Fire Marshal promote fireworks safety in Ohio?

The Department of Commerce actively reviews and works to increase fireworks safety, both in showrooms and for public exhibitions.

The department focuses on the regulation and education of the fireworks industry and those involved in the exhibition of fireworks.

The Division of State Fire Marshal operates a Fireworks Incident Team (FIT) to respond to the scene of any fireworks accident to investigate and assist local authorities. Investigations by FIT have led to both administrative and criminal action being taken against exhibitors who fail to follow the regulations.

Jail will move to Scioto Co.

It’s become known simply as “the jail situation.” With an ever-increasing overcrowding issue and the lack of funding to build,... read more