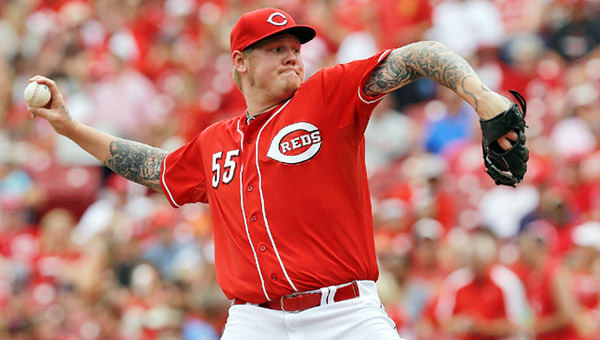 Cincinnati’s Mat Latos pitched eight innings of four-hit baseball for his second win of the season as the Reds beat Milwaukee 4-2 on Sunday. (Courtesy of the Cincinnati Reds.com)

CINCINNATI (AP) — Jay Bruce had hit the ball hard twice, only to see the worst slump of his career get deeper. He finally ended it with a hit that nobody was going to take away.

Bruce emerged from his 0-for-26 skid with a tiebreaking homer in the eighth inning on Sunday, rallying Mat Latos and the Cincinnati Reds over the Milwaukee Brewers 4-2.

Bruce flied out to the wall in center field and lined out to center earlier in the game, so he took a little confidence into his game-changing at-bat.

“I knew I wasn’t going to go 0-for-my-career,” Bruce said. “I’d been making hard contact. I really didn’t feel like I was 0-for-so-much.”

The Reds gained a game on the NL Central leaders by taking two of three in their series, moving to six back. Cincinnati has won 10 of 15 overall.

“That could have easily gone the other way,” Reds manager Bryan Price said. “We really didn’t want to lose ground on this team.”

The Brewers have lost five of six but still have the NL’s best record and a comfortable lead.

Bruce hit a two-run shot with one out off left-hander Will Smith (1-2), who took over for Yovani Gallardo. Smith hadn’t allowed a homer to a left-handed batter all season, holding them to a .143 average.

The matchup with the slumping Bruce seemed to favor Milwaukee in every way.

“It’s a crazy game,” Bruce said. “You can’t be surprised by anything that happens in the game of baseball.”

Smith got ahead 1-2 in the count, then threw a fastball that was up. Bruce pulled it to right field, the part of Great American Ball Park closest to the Ohio River.

“He’s given a lot of people trouble,” Price said of Smith. “He made a mistake. You do that and he’s going to hit the ball in that creek out there.”

A fan reached his mitt onto the field and hit right fielder Logan Schafer’s glove as he tried to catch the fly ball in front of the wall. The umpires initially ruled the ball in play, and Santiago circled the bases as Schafer and the ball fell to the ground.

Following a 3-minute, 46-second review, Santiago was ruled out because of the fan’s interference.

Latos (2-1) allowed two runs and four hits in a season-high eight innings. Jonathan Broxton pitched the ninth for his sixth save in eight chances. Closer Aroldis Chapman wasn’t available because he slightly pulled a hamstring while running in the outfield before the game.

Both teams were missing stars.

Brewers right fielder Ryan Braun was sidelined by a stiff back that forced him to leave Saturday’s game. Manager Ron Roenicke said the problem doesn’t appear to be series.

Reds first baseman Joey Votto got a day to rest his bothersome left leg. Votto missed 23 games with a strained muscle above his left knee and has batted .250 without a homer since his return. The muscle isn’t expected to heal fully until after the season.

Latos made his fifth start since recovering from torn knee cartilage and a strained pitching forearm that sidelined him until June 14. He let a 2-0 lead slip away.

Schafer tripled and scored on Scooter Gennett’s groundout in the sixth. Schafer also doubled off Latos with two outs in the eighth and came around on Rickie Weeks’ pinch-hit single, making Latos smack his glove in frustration.

In his last three starts, Latos has allowed a total of four runs in 22 innings, showing he’s fully recovered from the injuries.

Devin Mesoraco had three hits, including an RBI single in the first inning off Gallardo, who gave up two runs in seven innings.

Gallardo was coming off his worst start of the season: 10 hits, eight runs in five innings of a 10-4 loss to Colorado last Sunday. He settled in after a rough first inning. Bruce grounded into a forceout that drove in a run, and Mesoraco’s single made it 2-0.