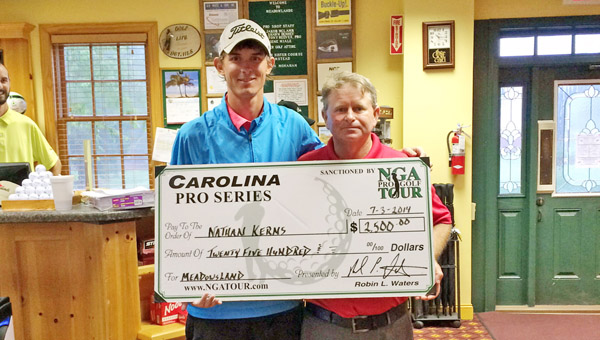 Ironton’s Nathan Kerns (left) proudly displays a replica of the first-place check he was presented after recording his first career professional victory Thursday in the NGA Tour. Kerns won the Meadowlands Tournament in the Carolina Series by two strokes with a nine-under par score. (Photo Submitted)

Just seven tournaments into his professional golf career, Ironton’s Nathan Kerns earned validation that he belonged with the elite.

Kerns picked up his first win on the NGA Carolina Series Tour and earned $2,500 for his two days of work.

“It’s a relief. I know I have the game to compete and it gets the monkey off your back,” said Kerns. “It took me a while to get in the winner’s column. The last three weeks I’ve been playing pretty good golf and finished in the top 10. You just try to make the cut and once you make the cut then you try to get the lead.”

The tournament was cut short during the third round when heavy rain due to nearby Hurricane Arthur forced the event to end prematurely.

The first round included six birdies, 10 pars and two bogeys. The second day featured an eagle along with four birdies, 12 pars and one bogey.

The early end was disappointing to Kerns for several reasons. Not only did he prefer to win playing a full tournament, but he was also having an outstanding round despite the bad weather.

He had 11 pars and a birdie in the third round before golfers were waved off the course.

“I had a very solid round going. I could have put it in the top five rounds I’ve played considering the conditions we played in,” said Kerns.

“You hate winning one like that, but you quickly get over it. I felt like I was going to win it anyway. I was one-under on the third day in a downpour and I was playing better than anyone when they called it. We all wanted to finish the tournament but there was no way.”

Kerns said the Carolina Series is more laid back and tournaments are 54 holes as opposed to 72. However, Kerns said the competition is just as tough as the other tours.

“There’s not much difference in the competition. There are fewer guys in the field, but everyone is still capable of winning the tournament,” said Kerns.

“It’s that way in any professional tournament. You have to play solid. There’s always one guy playing well and everyone chasing him.”

Not only did the tournament win benefit Kerns, but also his support system, especially his family and friends.

“It’s great having all my support. This win belongs to my family and friends as it belongs to me,” said Kerns. “They do a lot of little things for you. They give you emotional support if it’s just patting you on the back.

“It’s easy to give up after a few bad rounds and knowing how expensive it is, but when you have this kind of support it helps get you through the tough moments.”

Anyone interest in helping as a sponsor, making a donation or purchasing merchandise may contact Jeff Kerns at their home — 2320 S. Sixth St., Ironton, OH 45638 — or by calling Jeff at (740) 646-0770 or jhnmkerns@roadrunner.com, kerns.nathan@yahoo.com or pgawannabe@adelphia.net