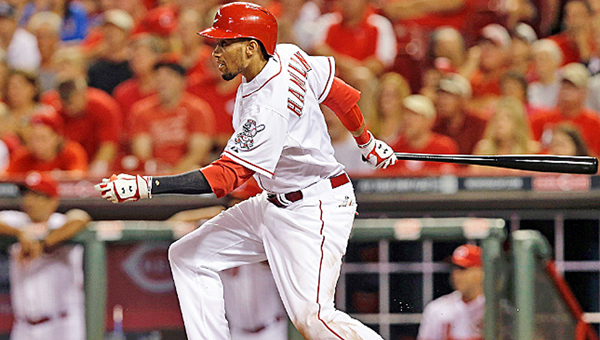 Cincinnati rookie outfielder Billy Hamilton singles home a run in the fifth inning. Hamilton drove in a career-high four runs as the Reds beat the Chicago Cubs 9-3 Monday. (Courtesy of the Cincinnati Reds.com)

CINCINNATI (AP) — An error that let in a run, a two-run homer that turned things around. Jay Bruce’s introduction to first base ended up being a big hit.

Bruce played first base for the first time since high school and committed an error that let in an unearned run Monday night, but later homered to help the Cincinnati Reds rally for a 9-3 victory over the Chicago Cubs in the opener of a five-game series.

“I ended up falling back on being a baseball player,” Bruce said. “In the end, I drove in more than I let in. It was definitely fun. I felt bad about missing that ball. That was a tough play, but it’s a play I expect to make and should make.”

Billy Hamilton drove in a career-high four runs with a single and a bases-loaded triple.

The Reds have won 11 of their last 16 games despite getting little production from injured first baseman Joey Votto, who had another test on his troublesome left thigh on Monday. The Reds were awaiting results before deciding whether to put him back on the disabled list.

Mike Leake (7-7) gave up a two-run homer to Anthony Rizzo and an unearned run off Bruce’s error during seven innings. Leake is 8-2 in his career against Chicago, including 4-0 in his last four starts with a 1.71 ERA.

After Bruce’s error let in a run that tied it 1-all in the fifth, he singled and scored on Devin Mesoraco’s double off Edwin Jackson (5-9).

Bruce hit a two-run homer off left-hander James Russell in the seventh. Hamilton tripled home the three runs in the eighth.

Chris Coghlan had four hits for the Cubs, who stranded six runners in scoring position. They had a runner thrown out at the plate in the sixth when Skip Schumaker — filling Bruce’s spot in right field — nailed Welington Castillo as he tagged from third on a fly ball.

Votto, the NL’s MVP in 2010, has missed the last two games with a strained muscle above his left knee, an injury that sidelined him for 23 games starting in May. He’s batting only .250 with no homers since his return.

Bruce volunteered to move to first base to help the short-handed Reds, who have no experienced backup at the position. He was on the field four hours before the game taking grounders and getting tips on how to cover the base in various situations.

“It was an experience, but one I hope I don’t have to prolong,” said Bruce, who expects to play first base occasionally.

Bruce made a couple of nice plays on ground balls and plucked a low pickoff throw out of the dirt. His first error in the infield helped the Cubs tie it 1-all in the fifth.

“I thought he did a good job,” Leake said. “It’s not easy for an outfielder to come in and play the infield like that.”

With two outs, Coghlan singled and went to third on Justin Ruggiano’s single. Bruce reacted slowly to Rizzo’s grounder toward the line, and it tipped off his glove for an error.

Bruce’s homer was his second in two days and his 49th off a lefty in the last five seasons, the most by any batter in the majors.

NOTES: The game was delayed by rain for 21 minutes in the middle of the third inning. … The teams play a day-night doubleheader on Tuesday, the first game making up for a rainout on April 28. The Cubs will go with LHP Travis Wood (7-6) and LHP Tsuyoshi Wada (0-0). Cincinnati will use Johnny Cueto (8-6) and LHP David Holmberg (0-0). … It’s the first time the Cubs and Reds have played a five-game series since 1999. … Former Nasty Boys relievers Rob Dibble, Norm Charlton and Randy Myers threw ceremonial pitches. Dibble had some history with the Cubs, plunking Doug Dascenzo in the back of the legs after his squeeze bunt during a game at Wrigley Field in 1991.

Sprinkle off team for now