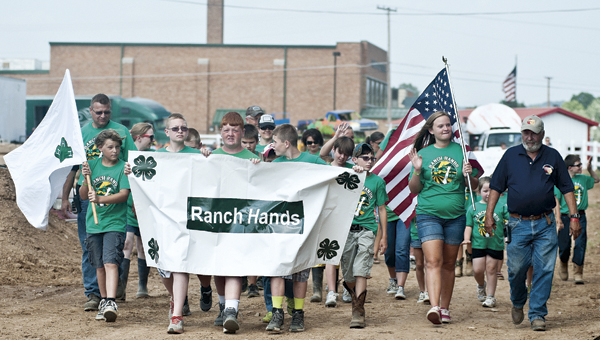 ROME TOWNSHIP — The afternoon was filled with pretty girls in their pretty dresses as the 2014 Fair Queen and her court were crowned.

The crowning of the young women is part of the traditional start of the Lawrence County Fair.

Lambert announced the beginning of a four-year renovation plan for the grandstand bleachers being done by volunteers and contractors. Also an addition was put on the 4-H Shelter to allow more space for the small animal auction, the one-time waste building is now a storage shed for those participating in the rabbit and chicken competition for their baskets and supplies and the former restaurant building is now the art hall for those competing with quilts, vegetables, crafts and paintings.

Then it was on to Jessie Herrell, who emceed the pageant portion of the ceremony. There was a larger than average number of contestants and two weeks ago the young women sat before four advisers of 4-H Clubs to quiz them on their knowledge of 4-H. The results of that determined who was chosen queen and princess.

This year’s Queen is Cheryl Crawford, who is the daughter of Ralph and Althea Crawford, a junior at Symmes Valley High School and a member of the Arabia All Stars 4-H Club and FFA.

“I’m excited,” she said after receiving her crown. “I just love the fair and everything about it. I’ve been a part of it my whole life.”

Princess for this year’s fair is Rosie Mannon, the daughter of John and Dara Gorby, a sixth grader at Fairland Middle School and a member of Ridge Runners 4-H Club.

“I’m pretty happy now,” she said. “My 4-H leader, Sabrina Watson, acts like a princess. So I decided I’d see if I could be one too.”

First runner-up for princess was Morgan Klaiber, daughter of Matthew and LeeAnn Klaiber, seventh grader at Symmes Valley Middle School and a member of the Gingham and Denim 4-H Club. Second runner-up is Sarah Shope, daughter of Bill and Kathy Shope; a seventh grader at Rock Hill Middle School and a member of BackRoad Hay-balers.

ROME TOWNSHIP— If the 4-H motto on the back of the Junior Fair Team Leaders T-shirts is true — “To... read more