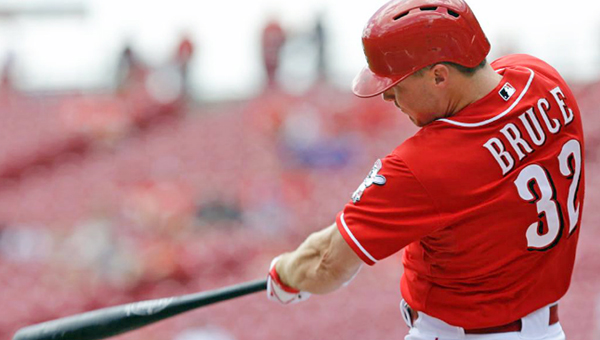 Cincinnati outfielder Jay Bruce hit a two-run homer in the first inning of the first game of a day-night doubleheader on Tuesday as the Reds beat the Chicago Cubs 4-2. The Reds rallied in the second game to win 6-5. (Courtesy of the Cincinnati Reds.com)

Finally, the Reds sense they are making headway.

Bruce’s homer sent Cincinnati to a 4-2 win in the opener on Tuesday, and Hamilton’s ninth-inning single gave the Reds a 6-5 victory and a sweep of the last-place Chicago Cubs.

With three wins in two days over Chicago, the Reds moved within 3 1/2 games of first-place Milwaukee in the NL Central, their smallest deficit since April 9.

So good that some of them wanted to keep going at the end of a very long day.

The Reds fell behind 5-0 in the third inning of the nightcap. Their biggest comeback of the season had been two runs. They took advantage of a struggling team, sending Chicago to its fifth straight loss.

Bruce doubled home the tying run in the eighth. Hamilton then had a broken-bat RBI single in the ninth off Hector Rondon (1-3) for the Reds’ first doubleheader sweep since 2009 against Pittsburgh.

Hamilton has driven in six runs during the series, relishing the clutch situations.

“I love ‘em,” Hamilton said. “I want to be the guy in a situation like that.”

The Cubs have been swept in all three of their doubleheaders this season. They haven’t won a game since trading starters Jeff Samardzija and Jason Hammel to Oakland for a package of prospects.

In the opener, Bruce returned to right field and hit another two-run homer, connecting off Travis Wood (7-7) during a three-run first inning.

Johnny Cueto (9-6) extended his stretch of success against the Cubs. He is 5-0 in his last seven starts against Chicago with a 1.19 ERA.

Chris Coghlan homered in both games and helped the Cubs get in position for a split, but Chicago’s bullpen couldn’t hold on.

Coghlan hit the first of three homers off left-hander David Holmberg, who lasted only 2 2-3 innings in his Reds debut. Coghlan is 7 for 12 in the series with two homers and two doubles.

Left-hander Tsuyoshi Wada made his major league debut and gave up an unearned run in five innings, leaving with a 5-1 lead.

Hamilton’s RBI triple cut it to 5-4 in the seventh, and Bruce — playing first base in the nightcap — had another pivotal extra-base hit against Pedro Strop.

Rondon gave up a pair of singles to open the ninth, and Hamilton singled to the opposite field for the win.

The Reds put first baseman Joey Votto back on the disabled list before Game 1, hoping a strained muscle above his left knee will heal enough to let him play this season. They’re using different players — including Bruce — at the position for now.

“The only thing you can see that’s positive out of this is it’s creating opportunities for other guys to play and they’re taking advantage of it,” Price said.

Bruce played right field in the first game and connected in the first inning off Wood. That made three straight games in which the left-handed hitter had a two-run homer off a lefty.

Bruce has 50 homers off lefties during the last five seasons, the most by any player in the majors.

Cueto gave up six hits in 6 1-3 innings, including back-to-back homers in the sixth by Coghlan and Ryan Sweeney.

Manny Parra pitched out of a one-out, bases-loaded threat in the seventh. Aroldis Chapman gave up a hit and a walk in the ninth while getting his 18th save in 20 chances.

NOTES: The opening game made up an April 28 postponement. … The start of the second game was delayed 35 minutes because of a forecast of rain. … Junior Lake snapped an 0 for 20 slump with a single in the ninth off Chapman in the opening game. … Reds C Brayan Pena was reinstated from the paternity list, filling Votto’s roster spot. … Reds 3B Todd Frazier will participate in the All-Star Home Run Derby.

Votto goes back on DL