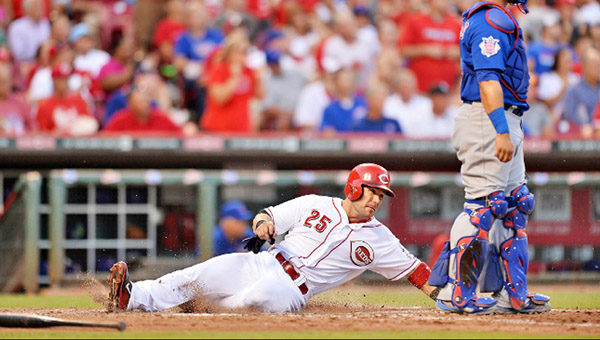 CINCINNATI (AP) — Alfredo Simon leads the National League in wins. He’s still hoping to be added to the All-Star team.

Simon became the NL’s first 12-game winner and Billy Hamilton added to his sensational series with a tiebreaking triple Wednesday night, sending the Cincinnati Reds to a 4-1 victory over the trade-depleted Chicago Cubs.

The Reds won their fifth in a row — matching their season high — and moved a season-best seven games over .500. After winning the first four games of the series, they’ll try for their first five-game sweep since 1976 on Thursday.

Cincinnati moved within 2 1/2 games of first-place Milwaukee in the NL Central, its smallest deficit since April 7. The Reds were a season-high 8 1/2 out on June 22.

Simon (12-3), left off the NL All-Star roster Sunday, became the first Reds pitcher to win a dozen games before the break since Edinson Volquez also went 12-3 in the first half of 2008. The reliever-turner-starter gave up four hits in 6 2-3 innings, including Anthony Rizzo’s third homer in four games.

If another pitcher has to pull out of the All-Star game next week, Simon would be considered.

“I’m really happy with myself,” he said. “I think I have the numbers to be on the All-Star team. I don’t know what’s going to happen. They told me to stand by.”

Hamilton tripled home a run and scored during a three-run fifth against Dallas Beeler (0-2), who has lost his first two starts in the majors. Cubs manager Rick Renteria was ejected during the inning for arguing a foul ball call with third base umpire Andy Fletcher.

Hamilton is 7 for 15 with three triples, three walks, two steals and seven RBIs during the series. On Tuesday night, his ninth-inning single completed the Reds’ comeback from a five-run deficit to a 6-5 win and a doubleheader sweep.

Hamilton flied out in his last at-bat and left the game because his left hamstring was tight. He expects to miss a few games.

“It’s been bothering me for the past couple of days,” Hamilton said. “I knew something was happening. On the last at-bat, I stepped down and I felt it pull when I started running.”

Reds second baseman Brandon Phillips also left in the eighth after spraining his left thumb while making a sliding catch. X-rays were negative. He wore a splint on the thumb as he left the clubhouse.

It’s been a tough week for the Cubs, who have lost all six games — their deepest slump of the season — since they dealt starters Jeff Samardzija and Jason Hammel to Oakland for a package of prospects.

Beeler and several others will get a chance to move up from the minors and fill their spots. The 25-year-old pitcher gave up four runs, six hits and four walks in five innings.

Simon has been one of the majors’ biggest surprises. Moved into the rotation when Mat Latos tore knee cartilage in spring training, the 33-year-old pitcher is having by far the best year of his career, ranking among the league leaders in several categories.

The right-hander walked two, matched his season high with eight strikeouts and threw 119 pitches, retiring 13 in a row during one stretch.

Aroldis Chapman struck out the side in the ninth for his 19th save in 21 chances. The left-hander has fanned at least one batter in each of his last 38 appearances, leaving him one shy of Bruce Sutter’s record for a reliever since 1900.

The Cubs called up second baseman Arismendy Alcantara for a couple of days. The 22-year-old infielder batted second and went 0 for 4 with two strikeouts. He’ll return to Triple-A Iowa when second baseman Darwin Barney returns from paternity leave.

NOTES: The Reds’ last sweep of a five-game series came against San Diego in 1976. They haven’t swept the Cubs in a five-game series since 1931 at Redland Field. … RHP Kyle Hendricks will make his major league debut on Thursday, facing Cincinnati’s Homer Bailey (8-5). The Reds have won 10 of Bailey’s last 11 starts against the Cubs. … It was Renteria’s fifth ejection. … The Cubs optioned LHP Chris Rusin to Iowa to open a roster spot for Beeler.

SANDUSKY (AP) — The Cavaliers have cleared a path for LeBron James to return to Cleveland. They’ve made their moves.... read more