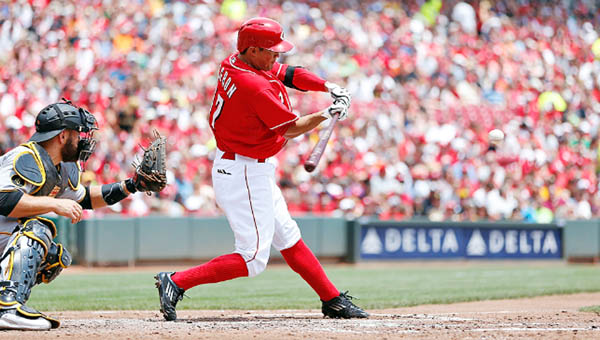 Cincinnati second baseman Kris Negron hit a three-run homer in the second inning — the first home run of his career — to help the Reds beat the Pittsburgh Pirates 6-3 and give Johnny Cueto his 10th win of the season on Sunday. (Courtesy of the Cincinnati Reds.com)

CINCINNATI (AP) — Kris Negron waited a long time for his first major league home run. When it came, he was in a hurry to celebrate with his teammates.

Negron hit a three-run homer, All-Star Todd Frazier added a two-run shot and the Cincinnati Reds rolled into the break with a 6-3 win over the Pittsburgh Pirates on Sunday.

Called up from Triple-A Louisville on Thursday for his first appearance in the majors since playing four games in 2012, Negron hit an opposite-field homer to right off Francisco Liriano in the second inning.

The RBIs were the first of his career, and the hit was his second.

“Negron is a tempo guy,” Reds manager Bryan Price said. “You could tell it was a surreal moment for him because he was flying around the bases. It was a lifetime achievement.

Negron has been in professional baseball for nine years. He was promoted from the minors when second baseman Brandon Phillips was put on the disabled list with torn ligaments in his left thumb.

“I was so amped up that I was around the bases as quickly as I could be,” Negron said. “I love playing this game. You have your ups and downs but you have to keep playing. I’m not thinking about how long I’m going to be here. I’m just blessed with the opportunity and I’m going to keep playing whenever my number is called.”

The game was delayed by rain for 56 minutes with Pittsburgh batting in the top of the fifth.

Frazier lined a drive just inside the right-field foul pole on the first pitch from Vance Worley in the sixth to help the Pirates finish 2-5 on their road trip.

“They got two good swings,” Pittsburgh manager Clint Hurdle said. “We came in and looked at Frazier’s home run. That was a good piece of hitting. We had something going after the rain delay. We were one pitch away from popping it. We weren’t able to get that big swing.”

The Reds went 8-3 on their 11-game homestand against Milwaukee, the Chicago Cubs and Pittsburgh to finish the first half 10-0-1 in series against those Central Division-opponents. They are 0-3 in series against St. Louis.

“It was muggy and he was on base a couple times,” Price said. “He took advantage of the rain delay. He got out of the heat.”

Cueto rushed off to Minnesota for the All-Star game.

Jumbo Diaz pitched the seventh, and Jonathan Broxton worked the eighth before Aroldis Chapman struck out the side in the ninth for his 21st save.

Diaz is another player added to the roster after a lengthy stint of 10 years in the minor leagues. He was invited to spring training for the first time in his career this spring and dropped 70 pounds to give him his first shot at the big leagues.

“He’s throwing the ball over,” said Price of his 274-pound reliever. “A lot of guys will try to miss the bat, but he comes right at the hitter with a 94 mile an hour fastball and a good slider.”

Liriano’s start was his first since June 10 against the Chicago Cubs, when he strained his left oblique strain. He tied his season high by issuing six walks for the second time in three starts.

Liriano (1-7) lasted four innings, allowing three hits and three runs with four strikeouts and a wild pitch. He left the bases loaded in two of his four innings.

“I was a little excited going out to pitch,” Liriano said. “I tried to do too much.”

Devin Mesoraco drove in Jay Bruce from first base with a double off the left-center field wall in the fifth.

NOTES: Reds IF Ramon Santiago was available but his left shoulder was sore after his attempt at a diving backhand stop of Travis Snider’s grounder on Saturday. … Reds RHP Alfredo Simon was added to the NL All-Star team.

CINCINNATI (AP) — The Cincinnati Reds said on Sunday that right-handed pitcher Alfredo Simon had been added to the National... read more