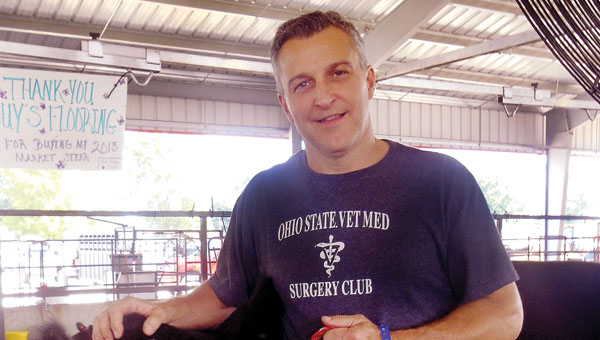 ROME TOWNSHIP — On hump day of fair week, Mike Dyer was getting a late start. Just a little after 8 a.m., Dyer pulled up in his truck beside the livestock arena to start that morning’s rounds.

Usually, the fair’s vet would have started looking over the animals in their pens about an hour earlier. But an uncooperative Grand Champion kept Dyer at the arena longer than he had wanted the night before.

“Each Grand Champion and Reserve Champion must be drug tested,” Dyer said. “This is for two purposes. We don’t want any performance enhancing drugs and these are food products. We don’t want consumers to be eating market animals tainted with drugs.

So after each market animal competition, Dyer must get hair samples and a urine specimen to send off to the USDA in Columbus with the results back before the livestock auction on Saturday.

On Tuesday night getting a sample of hair from the Grand Champion sow was simple, just a quick run with a razor. The other specimen took a little longer since the hog decided she just didn’t want to go until past the witching hour of midnight.

But such is the life of the fair vet during eight days in July when Dyer is the one owners of the 500 animals filling the barn at the fairgrounds come to when there is something wrong.

Fifty-one weeks out of the year Dyer is headquartered at his vet clinic, the Proctorville Animal Clinic on State Street in the village, where a Great Dane may be the largest animal he checks out.

But during fair week Dyer volunteers his time to make sure everything from a four-pound rabbit to a 500-pound hog is in good health.

“There are signs you learn when an animal is sick,” he said. “Its head is down. Its ears are down.”

Usually the first line of defense for the animals comes from their owner, who usually alerts a fair committee member something is wrong. They, in turn, call in Dyer.

“Each species has its own committee and they do a lot of the field work,” he said.

Dyer’s work started on the first Saturday of fair week when the 4-Hers brought their animals in before the first shows on Monday.

“I look for the obvious signs of contagious diseases, nasal discharge, coughing,” he said.

Then he settled into a routine that would bring him to the barns most days by 7 a.m. First he would check out the steers his daughter, Ann Michal, was showing. Then he would do a walkthrough of the various pens.

“I look for the obvious,” he said. “Injuries. Diarrhea. Excessive panting. Overheating is an issue. But the new barn has been a big help with the overhead fans.”

Usually the days are cookie cutter routine. However this year’s fair brought a 3 in the morning call to Dyer after two dogs attacked a prize feeder steer, shredding its tail.

But misfortunes like that are few during fair week and for Dyer the joy in his work is watching the youngsters interact with their animals and make new friends.

“This is training the kids responsibility,” he said. “For me the reward is seeing kids make lifelong memories.”

Is there a necessity?

Group formed to explore drop-in center prospects   An exploratory meeting to determine if Ironton could use a daytime drop-in... read more