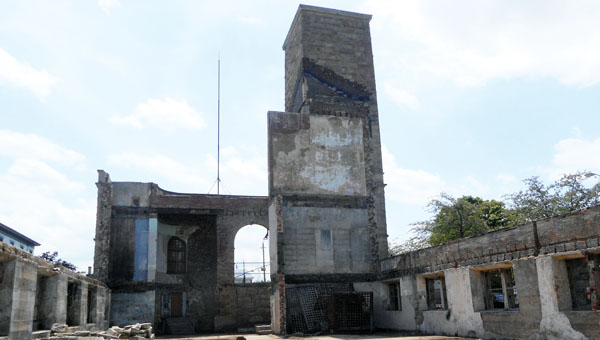 Getting compliments on how good Memorial Hall looks is not something Ironton Mayor Rich Blankenship is used to hearing.

But after Jack Hager’s Southern Ohio Salvage and Contracting finished gutting the historic structure at a price tag of $127,000, compliments are just what Blankenship has been getting.

“Obviously it has taken this administration seven and a half years to get to this point after exploring many avenues to try to save the building for the future,” Blankenship said. “That didn’t seem feasible.”

When restoration wasn’t possible, a committee was formed to determine what the future would be for the structure built as a memorial to the Union Army and once served as the city library and city hall for Ironton.

However for decades, the building has stood decaying before the residents of the city. At one point to stabilize it, the roof was removed with rain and snow subsequently sending the top floors crashing into the basement.

The county commissioner considered gutting it and rebuilding its interior to turn it into a headquarters for area safety agencies. But costs prohibited moving forward with that plan.

“What can we do with this building?” Blankenship said. “Our future hope is to make it a veterans memorial park. And this will be step one by making it safer and removing that top level of brick.”

Now the committee, made up of Ironton In Bloom President Carol Allen, Ralph Kline of Ironton-Lawrence County Community Action Organization and Mike Pierson, are gearing up for Phase II of the Memorial Hall project.

“I will get with our engineer and make sure it is stable,” Blankenship said. “Then we will meet again about what is our next step in making it a park.”

Kline said the hall could become a resting spot on the walking trails planned for downtown Ironton.

“I think the biggest unknown was the structure of the tower and that survived the demolition process,” he said. “It has all come out very well. The committee has some conceptual plans we will be looking at and taking those plans to the next phase. We want to maintain it for a memorial for veterans.”

Funds from a Healthy Trails grant focusing on providing places to walk for downtown and senior population could go toward the memorial park.

“Part of that grant is to develop resting areas,” Kline said. “One is there at Memorial Hall. We can make some expenditures there bringing some of the plans together.”

Biomass has 90 days to pay taxes

The owners of a Nicholasville, Ky.-based company facing foreclosure on property in Lawrence County because of back taxes have gotten... read more